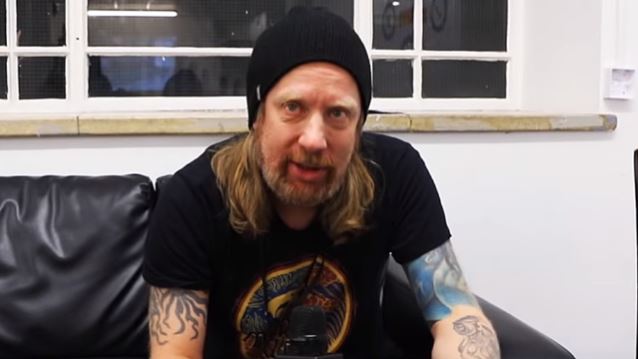 Jägermeister conducted an interview with vocalist Tomas Lindberg of Swedish metallers AT THE GATES on November 7 at the Damnation festival in Leeds, England. You can now watch the chat below. A few excerpts follow (transcribed by BLABBERMOUTH.NET).

On whether AT THE GATES feels any pressure having to live up to its "legendary" status:

"Playing shows now… We've done over a hundred shows on this record [2014's 'At War With Reality'], so right now we are in a very comfortable place. We feel we've already proven ourselves with the record. Putting the record out was a big step — that was a big step — but when we did that and managed it — you know, people embraced it, the press embraced it, the fans… everything — after that, it felt like we pretty much could do what we wanted, and we tried to do just that and have fun doing it. So, I mean, the pressure is not really on it like the 'legendary band' kind of thing anymore, it's just, like, we have to be good because you're only as good as your last show. It's a normal pressure for us."

On why AT THE GATES felt it was necessary to make a new studio album:

"Releasing the album really put us more in a contemporary, 'relevant today' status; that kind of washed away the 'legendary' bit. Which is kind of like… in one way, probably, record labels think that's a bad idea to lose that, but, for us, it was necessary to be able to contribute to the music scene today."

On whether AT THE GATES was confident it could do justice to its legacy with "At War With Reality":

"We were very confident that we liked it. Up until that point, where we were working on it, when you don't really know what it's gonna turn out like, you can be a bit nervous, but when you're finished, when you're starting to get the mixes back, the artwork is getting ready, and you feel like, 'Shit, I'm proud of this record,' then if it would have been slagged, it would have been worth it, because we liked it. It was definitely something we needed to do."

On how being in AT THE GATES is different today from how it was before the band's split:

"We're very much more democratic now, saying that everybody had to be happy with everything. Which means in one way… It sounds like a compromise, but it's really not. It's really the opposite. You have to work harder until everybody is happy. So we knew, going in, that I wouldn't be disappointed, 'cause that was like a goal: that everybody had to be one hundred percent happy. [There was] a lot more meticulous work and hard effort, but all the time fun, because we kind of like spurred on each other and inspired each other."

On AT THE GATES' plans for the future:

"I think we will be touring this [album] until at least the end of next summer, as it looks now. After that, we will see where we're going. It is a conscious decision as well to do that — to not plan too much ahead, to live in the moment, to not put pressure on ourselves writing while we're enjoying this. 'Cause that's what happened in the '90s with us, and that's why we imploded, so we don't wanna do the same mistake twice. But, I mean, I can say that we're not planning not to do a follow-up [album], if you know what I'm saying. So I have high hopes. We will see where it takes us."

AT THE GATES has announced a string of U.S. tour dates to follow after its appearance on the 2016 edition of the 70000 Tons Of Metal cruise. Set to kick off on February 9, 2016 in Fort Lauderdale, Florida, the trek will also feature THE HAUNTED and DECAPITATED (direct support) and HARMS WAY.