Geddy Lee fans across North America would simply do just about anything to spend time with him at his home to hear his stories on baseball, wine and art.

This opportunity would be like a dream come true — a "backstage pass" in every right. Yes, this would be a "closer to the heart" experience with the bassist and frontman of one of the world's most iconic progressive rock bands of all time — RUSH.

HOSS magazine, one of North America's most innovative magazines that is known as the "home owner's simple solution," is offering Lee and RUSH fans with that "backstage pass" they have always dreamed of.

You see, the popular magazine is featuring Lee on the cover of its November/December Holiday issue. The issue, which will be widely sought after by RUSH fans around the world, hits the newsstands across Canada and the USA on November 19.

The photograph of Lee on the cover of HOSS shows him with his classic and notable Fender jazz bass guitar, as he sports a black shirt, blue jeans, and his trademark converse shoes.

Lee, who is the vocalist, bassist, and keyboard player for RUSH — which also features drummer Neil Peart and guitarist Alex Lifeson — is an internationally acclaimed music icon. RUSH released their first album in 1974 and celebrated their 40th anniversary this past summer by performing a career-spanning live retrospective "R40 Live" to sold-out arenas and rave reviews across North America. The "R40 Live" DVD/CD from that tour, filmed in their hometown of Toronto, will be available November 20.

The HOSS feature story on Lee inside reveals his passion for collecting vintage bass guitars, some of which line the walls of his studio and home, and how his passions extend to wine, baseball and his commitment to philanthropy.

An avid Toronto Blue Jays fan, Lee's home in Toronto is decorated with scores of baseball memorabilia of sorts, reports HOSS magazine. In 2008, he donated almost 400 signed baseballs from his personal collection — all them autographed by former Negro League baseball players — to the Negro League Baseball Museum in Kansas City. Lee is also an active board member with Grapes For Humanity, a charitable organization that works with the international wine community to raise funds benefiting humanitarian causes around the world.

HOSS magazine also reveals that he has a vast wine collection: red or white, he has literally hundreds of brands decorated throughout his home. And let's not forget his gargantuan wine cellar that houses over 5,000 bottles curated from some of the best vineyards around the world, including a host of very hard to find Burgundies.

His homes in both Toronto and London feature art that he and his wife have collected over the years that is captive and engaging — artistic in every sense. In a unique sort of way his art collection mirrors his creative, sophisticated and open minded inner-self.

In this HOSS issue, Lee revealed to writer Philip Wilding that his interest in art was piqued by notable photographers, like André Kertész, Paul Strandand, and Alfred Stieglitz. He then shifted his sights towards fine art, and discovered this interested on a major U.S. tour with RUSH in the late 1980s.

"It didn't matter what city I was in, I would go to an art gallery. What kept me sane on that tour was learning about art," says Lee.

"You can learn a lot by buying the books and going to every gallery you can and seeing what they have there — letting your eyes take it all in," he says.

Lee indicates in the feature story that he got into baseball ephemera because he has long loved the game. And then he found that something like a ball signed in 1917 made him want to look at 1917 America. For him art is the same. Whatever artist you become enamored with you absorb his life and times, the story behind that existence.

"Case in point, I'm a child of the '50s, so I have great respect for the artists that came in the early part of the 20th century and survived the war," says Lee. "And their art survived too and has gone on to become important. I think that's why I'm fascinated by that period of history to a certain extent. They and their work endured. Art goes on and touches us and our history."

The four-page feature on Lee is a must-read, according to Sean Rice, who is the publisher of HOSS magazine.

"From the recording studio to the stage, to his homes filled with the things he is passionate about — wine, baseball and art, Lee is fascinating on every level," says Rice. "Our feature tells a unique story about Lee and his passions, and RUSH fans will no doubt have a 'closer to the heart' experience with Geddy when they read our in-depth feature on him."

Since Geddy is the Holiday issue cover story, HOSS magazine is running a "Closer To The Heart With Rush" contest in its magazine and online for readers.

Anyone can enter to the chance to win a custom Fender Squire vintage modified jazz bass '70s guitar. The bass comes with a custom engraved R40 Pickguard, produced by Fender exclusively for RUSH. The prize pack also includes the new "R40 Live" DVD set. Plus there is a Sonos prize package of Sonos Wireless HiFi Speakers (includes 2 Play: 1 wireless speakers, (1) Play3: wireless speaker, and SUB). And winners will also have the chance to win a one year free subscription to HOSS magazine. 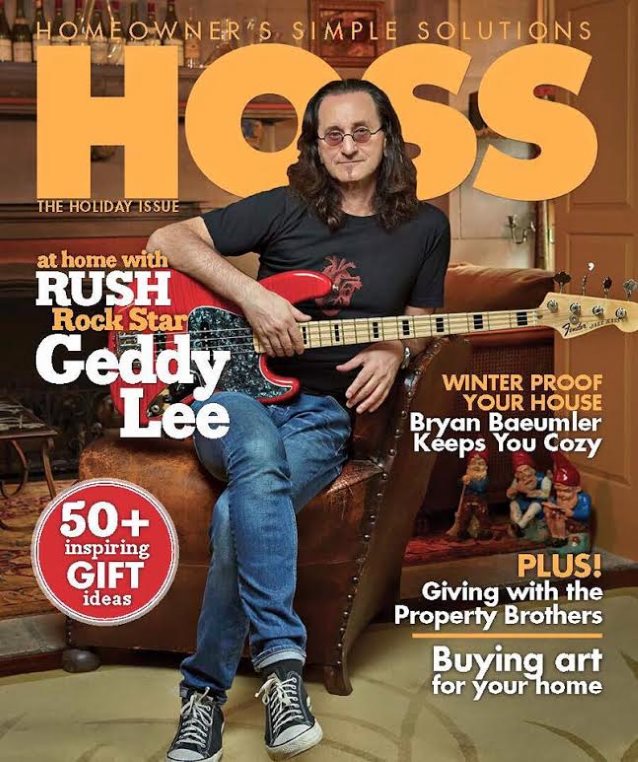