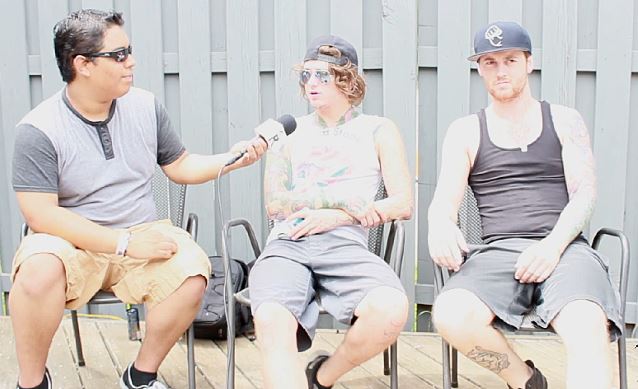 RichardThinks conducted an interview with Ben Bruce (guitar) and Sam Bettley (bass) of the British metalcore act ASKING ALEXANDRIA backstage during the recently completed Rockstar Energy Drink Mayhem Festival. You can now watch the chat below. A couple of excerpts follow (transcribed by BLABBERMOUTH.NET).

On whether ASKING ALEXANDRIA has begin working on the follow-up to last year's "From Death To Destiny":

Ben: "We're actually writing our new album. I think we're written eleven songs so far, and we wanna write twenty before the [Mayhem] tour is over, so that we have a bunch to choose from.

"Having a studio on tour with us, it's nice. We don't have to sit down with a laptop and make bullshit demos. I mean, I was listening to the demos we wrote — I was listening just like yesterday — and I was thinking, 'Man, these demos actually sound a lot better than some bands' albums that come out. Not the songs — they do too — but I just mean the quality; it's studio quality already, and they're just demos. So it's exciting."

On the direction of the new ASKING ALEXANDRIA material:

Ben: "This, to me, is the best stuff we've ever written. Musically, it's far, far superior to any of the previous albums. All of us have really practiced our instruments, and we're making a record now where each of us can shine individually as musicians. There's a lot more lead guitar, the bass lines are more intricate. There's a lot less relying on breakdowns. Even if we wanna keep a song heavy, we're not just automatically going, 'Let's write a breakdown to make it heavy.' We're thinking of other ways and other aspects to incorporate into songwriting that will make a song heavy rather than just taking the easy route and writing a breakdown, you know."

On whether ASKING ALEXANDRIA will work with producer Joey Sturgis on the next album:

Ben: "Joey's been out and he's heard all the demos. We were gonna write the demos with him this tour, but, unfortunately, he couldn't make it. But we still talk to him every day and stuff, so we'll see what happens."

On when fans can expect to see the next ASKING ALEXANDRIA album:

"From Death To Destiny" sold 38,000 copies in the United States in its first week of release to land at position No. 6 on The Billboard 200 chart.