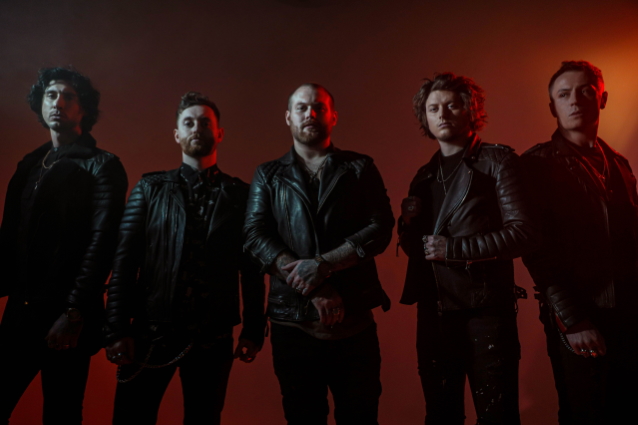 Leading independent label and artist development company Better Noise Music has signed ASKING ALEXANDRIA to its roster. The new U.K. deal, announced by Better Noise president Dan Waite from the label's U.K. office, starts this month with the band already in the studio working on new music, which is expected to be released later this year.

"Today we welcome ASKING ALEXANDRIA into the Better Noise Music label, and we are thrilled to join them on the next chapter of their musical journey," Waite said. "The fact that ASKING ALEXANDRIA are from the U.K. with a worldwide audience, gives us the opportunity to deepen their strong connections with fans on both a local and international level across Better Noise Music's global offices. As a global touring act they have over one billion cumulative streams and views, and we look forward to building on that success."

Ben Bruce, founding member of ASKING ALEXANDRIA and lead guitarist, spoke on behalf of the band in a statement, saying: "We are all extremely excited to be part of the passionate team at Better Noise Music. Over the past ten years, we've been so grateful to connect with fans all over the world. While we've concentrated particularly on our North American fanbase in the past, our goal for the future is that our music and live shows become more accessible to audiences on a global scale. That is why we jumped at the chance to sign to Better Noise. Working with the team out of the label's U.K. branch gives us the opportunity to be more connected as a band to our home country, while simultaneously working with all of their international offices to reach our goals. We are all extremely proud to hail from England and getting back in touch with our roots is something that is beyond exciting to us. We are more focused, more driven and more determined than ever before. Thank you to everyone who has helped us and supported us over the years. It truly means the world to us. Here's to the future."

Since 2008, ASKING ALEXANDRIA, formed and based in the U.K., has paved a path of its own, distilling danger and excess into an equally dangerous hybrid of stadium rock ambition, metallic energy, and electronic ecstasy. Against all odds, they achieved unprecedented success earmarked by two gold-certified singles (namely, "Final Episode (Let's Change The Channel)" and "Not The American Average"), over a billion cumulative streams and views, and three consecutive top 10 debuts on the Billboard Top 200 — "Reckless & Relentless" (2011), "From Death To Destiny" (2013) and "The Black" (2016). In addition to headlining packed gigs on five continents, they destroyed stages alongside GUNS N' ROSES, GREEN DAY, AVENGED SEVENFOLD, ALICE IN CHAINS and SLIPKNOT, to name a few. Meanwhile, 2017's self-titled "Asking Alexandria" spawned two of the group's biggest singles to date: "Alone In A Room" (40 million Spotify streams) and "Into the Fire" (30 million Spotify streams). The quintet — Ben Bruce (guitar, backing vocals), Danny Worsnop (lead vocals), James Cassells (drums), Cameron Liddell (guitar) and Sam Bettley (bass) — recently saw critical acclaim with their 2020 sixth full-length LP, "Like A House On Fire". Worsnop recently collaborated with Better Noise artist PAPA ROACH for their track "Broken As Me", which appeared on the band's "Greatest Hits, Vol. 2: The Better Noise Years", released in March.

Diony Sepulveda, veteran talent executive and the band's manager, added: "ASKING ALEXANDRIA accomplished a lot in their first decade, and most of it was done on instinct, guts, heart and pure drive. But while the band is already part of the hard rock culture in America, they wanted more, especially internationally. At a time where information and analytics play an ever-increasingly crucial role in the record business, the Better Noise team has cracked the code on obtaining key data from their digital partners, analyzing it efficiently, translating it to the artist, and utilizing it to help maximize and grow the band's digital footprint. So we jumped at the chance to see what their team could do to help elevate the band on a global level. I truly cannot wait for the world to experience the results of this exciting new partnership."

Better Noise reached a historic radio victory in 2020, when Mediabase named it the number one rock label for the third consecutive year in the U.S., and Billboard crowned it the top mainstream rock label of the year.