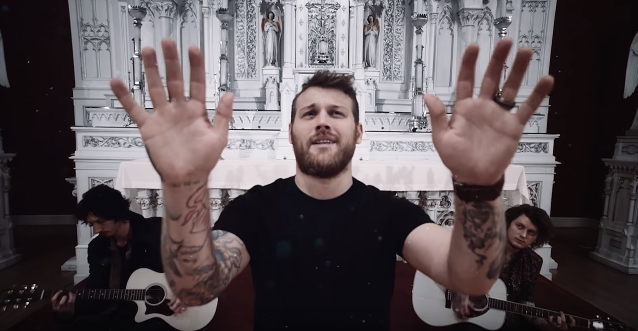 U.K. metalcore act ASKING ALEXANDRIA has released a brand new video for the beautifully stripped down, acoustic version of its third Top 10 radio hit "Alone In A Room" (currently No. 8 on the Active Rock chart).

"Alone In A Room" is the second single from ASKING ALEXANDRIA's self-titled fifth studio album, which was released last December via Sumerian Records. To date, the song has racked up a whopping 13.7 million streams on Spotify, 28 million global streams, five million YouTube views and spent five weeks at No. 1 on Sirius XM's "Big Uns" countdown. The acoustic version of the track was released as a B-side to the single and has received 765,000 streams to date.

ASKING ALEXANDRIA is currently on the road with GODSMACK and SHINEDOWN and will play the Aftershock festival in Sacramento this weekend. The band also announced last week that they will join SHINEDOWN and PAPA ROACH for the "Attention Attention" tour in early 2019.

Combining the innovation of modern active rock with the traditional attitude of the culture's trailblazers. ASKING ALEXANDRIA has now firmly cemented its place in the upper echelons of modern rock. They've shared the stage with GUNS N' ROSES, GREEN DAY, ALICE IN CHAINS, AVENGED SEVENFOLD and SLIPKNOT; co-headlined with BLACK VEIL BRIDES; joined Warped Tour and Rockstar Mayhem; played every major rock festival in the world; and headlined sold-out theater tours. Their singles "The Final Episode" and "Not The American Average" were both certified gold by the RIAA for sales in excess of 500,000 copies each. The music videos for those two singles alone amassed over 100 million views on YouTube. Their third full-length album, "From Death To Destiny" (2013), shot to No. 1 on the rock and metal charts in the U.K. and cracked the Top 5 of the Billboard 200 in the United States upon its release.