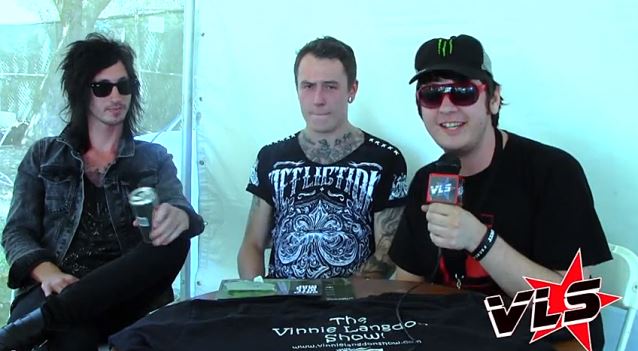 "The Vinnie Langdon Show" conducted an interview with the British metalcore act ASKING ALEXANDRIA at the Aftershock festival, which took place September 14-15 at Discovery Park in Sacramento, California. You can now watch the chat below.

ASKING ALEXANDRIA's third album, "From Death To Destiny", sold 38,000 copies in the United States in its first week of release to land at position No. 6 on The Billboard 200 chart. This achievement not only marks the group's highest-charting debut ever, but also Sumerian Records' highest first-week sales to date.

"From Death To Destiny" debuted at No. 1 on the U.K. rock and metal chart. It's another first for the band, and it's particularly special for the band to garner so much support throughout their home country.

Commented ASKING ALEXANDRIA guitarist Ben Bruce: "It's taken long enough! It wasn't because we were being lazy, but because we wanted it to be perfect. 'From Death To Destiny' is our third album and we wanted to make sure we'd bring out the best possible record we could."