Fans who can't wait for ASKING ALEXANDRIA to hit this summer's Rockstar Energy Drink Mayhem Festival tour — or who can't make it to any of the back-to-back shows — can still get a look at the British metalcore band's newest project: a brand-new ad for peta2, PETA's youth division, that stars frontman Danny Worsnop and guitarist Ben Bruce alongside a canine pal and below the words "Save a Life: Adopt, Don't Buy." The ad goes on to encourage everyone to "give shelter dogs a chance" by refusing to support pet shops or breeders.

In an exclusive video interview with peta2, the musicians — who call themselves "the coolest people you know from the coolest band you know" and spend half the interview mocking one another — talk about their own adopted animal companions, including Bruce's recently adopted dog. "She was abused, and she had a terrible life before," Bruce says. "There's loads of dogs out there that already need a home. … Plus, they're so much more appreciative if you've rescued them from a shithead. They'll love you even more."

Adds Worsnop, "We're a band of dog lovers and animal lovers and have been our whole lives. It keeps the world going round. We'd be well fucked up if it wasn't for animals."

Six to 8 million cats and dogs end up in U.S. animal shelters every year, and roughly half of them have to be euthanized because there simply aren't enough homes for them. For every puppy or kitten bought from a breeder or pet store, a dog or cat in an animal shelter loses his or her chance of finding a home. The best way to help dogs and cats is to adopt — and, of course, always spay and neuter.

ASKING ALEXANDRIA joins a growing list of musicians and other celebrities — including ARCHITECTS, Cristina Scabbia of LACUNA COIL, WHITECHAPEL, Morrissey, ARCH ENEMY's Alissa White-Gluz, BETWEEN THE BURIED AND ME, JANE'S ADDICTION's Dave Navarro and THE ACACIA STRAIN's Devin Shidaker — who have teamed up with peta2 to promote kindness to animals. 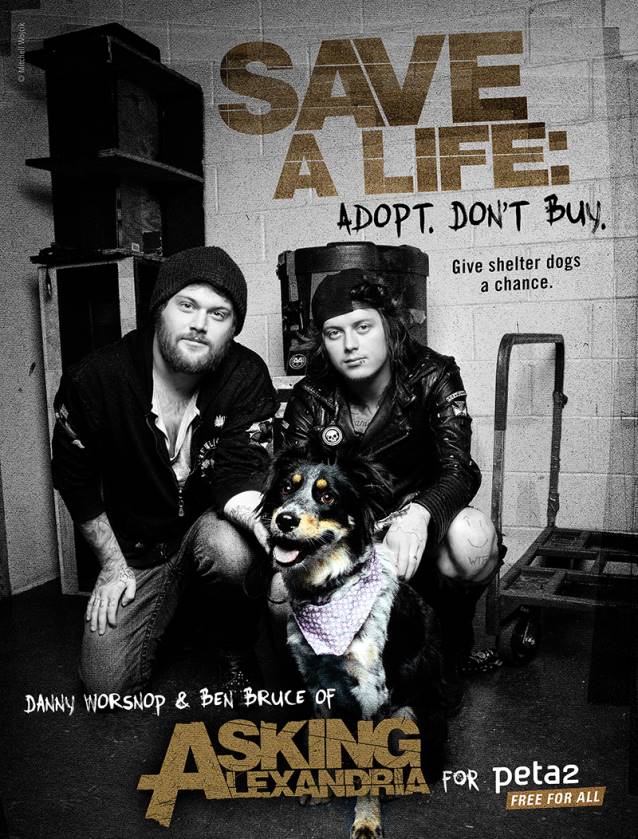