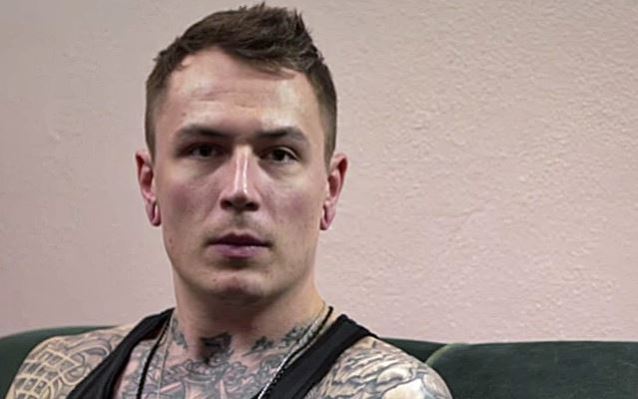 ASKING ALEXANDRIA drummer James Cassells says that the band is planning on entering the studio next year with singer Danny Worsnop to begin work on new material as a follow-up to "The Black" album.

The reunion between Danny and ASKING ALEXANDRIA was confirmed last month following weeks of rumors and speculation regarding the status of Worsnop's replacement, Denis Shaforostov, who joined the band in 2015.

ASKING ALEXANDRIA's October 25 concert in Seattle kicked off the "10 Years In The Black" tour, celebrating the tenth anniversary of the band's label Sumerian Records.

ASKING ALEXANDRIA's set on the current tour does not feature any tunes off the band's sole album with Shaforostov, "The Black", but does reach back into the group's catalog with Worsnop to play songs that had not been performed live in four or five years.

Speaking to Wes Nessman of the KFMX radio station in Lubbock, Texas, Cassells denied that the renewed collaboration between Danny and ASKING ALEXANDRIA puts damper on the band's promotional efforts for "The Black", which has only been out for eight months.

"Don't get me wrong: we all love 'The Black', we had a great time recording it, and we toured it for a year and a half around the world," he explained (hear audio below). "We've had a great time on it, but I think that whole chapter of our lives is now… It's time to go to the next step. 'The Black' was the album we needed to release at the time, but now I feel like we're gonna go back to doing what we were doing with Danny, and we're gonna be moving forward with new music."

He continued: "We toured literally the globe on that album — everywhere from Australia to South America to Europe and North America… everywhere, man — we did some extensive touring on this, so I think a lot of fans that do like it got to see it, and it's cool, but now it's time to look for the next chapter, the next step."

According to Cassells, that "next step" means returning to the studio to work on a new album, the band's first to feature Danny since 2013's "From Death To Destiny".

"Before this tour, I'd only spoken to Danny once very briefly, [and] some of the [other] guys [in the band] hadn't spoken to him at all," the drummer admitted. "We needed to make sure that we would still enjoy touring together. That was a question that we were all asking ourselves, and it's not like we don't know if we can fucking handle it, but when you've been away from playing music on stage with someone for so long, that question does arise. But we've just hit the halfway mark on the tour, and it's been amazing — it's probably been one of my favorite tours, I think, I've ever [done] in my career, and we're having a great time. So now [that we know] we can obviously perform together better than ever, the shows are doing great, now it's, like, 'Let's get some music written.'"

He continued: "I think in the coming year, we're really gonna get ourselves in the studio and start working on new material. We already have — Ben [Bruce, guitar] and me and the guys, we are constantly writing music; that's a constant thing — but we are actually gonna go get in the studio with Danny, go lock ourselves away for a bit and really work on some great new material for people… We are gonna lock ourselves away. It might take a minute, which I think that's good. Danny's a busy guy — he's got a lot of projects on at the moment. We've been touring pretty much constantly for a while now. Having a little bit of time to lock ourselves away, get creative, get back in that flow. So, yeah, the next year, though, is gonna be a busy year for us — not so much in the forefront, like playing shows etc., but for us as musicians, we're gonna be in the studio, we're gonna be in the practice space, we're gonna working. There's gonna be a lot of work going on, man."

Bruce said in a video message last month that Shaforostov had "just stopped talking to us." But the singer later tweeted, "I left AA because I can't be in a touring band at this point in my life. There's no drama and I don't want to be a part of it."

Worsnop's debut solo album, "The Long Road Home", will be released in February. The effort sees a slight musical departure from Danny's previous work with ASKING ALEXANDRIA, with the singer saying about the disc's direction: "I'm still, for the most part, singing the blues. But I went into it with country in mind."