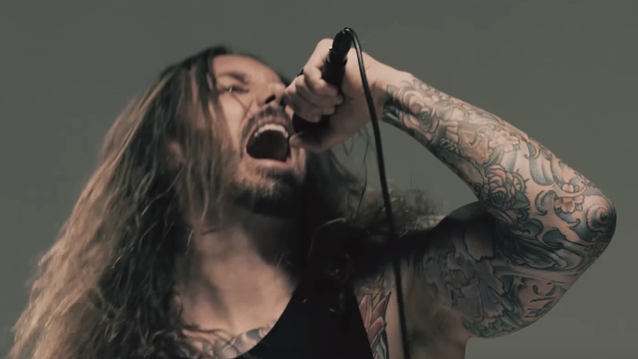 AS I LAY DYING frontman Tim Lambesis, who served time in prison for hiring a hitman to kill his wife, says that part of his life's work now is to undo the hurt he has caused.

In June, AS I LAY DYING played its first show with Lambesis in five years and released a new single. Lambesis also owned up to his crimes in a long apology on the band's Facebook page after his release.

Last month saw AS I LAY DYING complete its first U.S. tour in five years and the band is currently in the middle of a European run of shows.

Prior to AS I LAY DYING's concert in Munich, Germany on Saturday (December 8), Lambesis once again took to the band's Facebook page to say that he has reconstructed his life and rededicated himself to the principles of honesty and commitment to community necessary to garner public trust.

He wrote: "I stand against who I became in my past and am pursuing a new purpose in the rebirth of AILD. We collectively are.

"People who support AILD are not supporting the person I once was, because part of my life's work now is to undo the hurt I've caused and to help others in addiction. Instead, I think AILD fans are supporting the belief that people can change.

"I will never be able to undo my greatest mistake, but I believe it's better to do something rather than give up.

"AILD collectively condemns all forms of domestic abuse and violence. Its aftermath is one of pervasive, long-lasting hurt and there is no acceptable excuse or defense for such behavior. Our agenda as a band is to actively back and work with organizations who offer support to those who are emotionally suffering and in pain. Whether it be from a history of abuse, hardship, or mental illness — pro-activity in healing and recovery is at the core of what this band is now.

"Tonight we'll play the biggest headline show of our career (topping our second biggest headline show earlier on this same tour). Our fans in Germany did not know this when they bought their tickets, but we will be donating a portion of proceeds from our show to HeartSupport; an organization we believe in that functions to provide emotional support and counseling to young adults caught in cycles of addiction, depression, sexual abuse, and family turmoil. Our mission is to continually seek and implement ways to facilitate positive, meaningful change in the world around us.

"For now, we don't want to miss out on bringing purpose into our biggest moment yet. We've been given a second chance we thought we'd never have again and we certainly don't take it for granted."

In October, the organizers of Spain's Resurrection Fest removed AS I LAY DYING from next year's lineup following an outcry from certain fans.

I stand against who I became in my past and am pursuing a new purpose in the rebirth of AILD. We collectively are....

Posted by As I Lay Dying Official on Saturday, December 8, 2018