Metal Blade Records has set a May 11 North American release date for "The Powerless Rise", the fifth full-length album from San Diego, California metallers AS I LAY DYING. The band recently finished up the recording process in San Diego with producer Adam Dutkiewicz (KILLSWITCH ENGAGE) and mixed the effort with Colin Richardson and his assistant Martyn "Ginge" Ford.

AS I LAY DYING's critically and commercially acclaimed release "An Ocean Between Us" landed the No. 8 position on the Billboard Top 200 chart its first week out, making it the highest rock debut on the chart that week. The band's first-ever DVD, "This is Who We Are", entered the Billboard Top Music Videos chart at the No. 2 position in the U.S. and the No. 3 position in Canada. The DVD is also certified platinum in the United States and Canada by the Recording Industry Association of America (RIAA). In addition, 2008 saw AS I LAY DYING earn a Grammy nomination for "Best Metal Performance" for the single "Nothing Left". 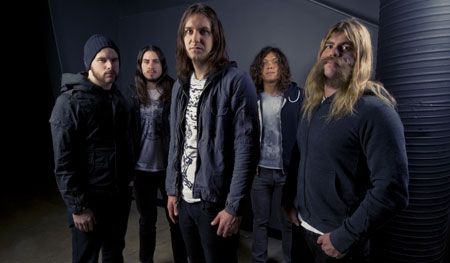