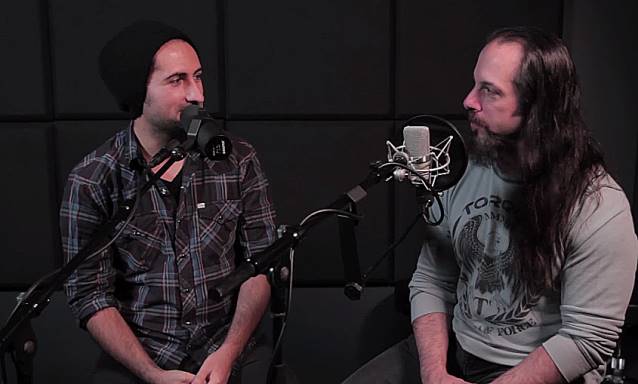 DREAM THEATER guitarist John Petrucci sat down with his nephew, PERIPHERY guitarist Jake Bowen, in an exclusive Roadrunner Records interview about music, family, working together and more. Check it out below.

DREAM THEATER's spirit of adventure and fearless musical virtuosity continues to reap dividends for the progressive metal titans who've just earned their second Grammy nomination, this time for "Best Metal Performance" for their single "The Enemy Inside" from their current self-titled album on Roadrunner Records. The band — John Petrucci (guitar), John Myung (bass), James LaBrie (vocals), Jordan Rudess (keyboards & continuum) and Mike Mangini (drums) — received its first-ever Grammy nomination in 2012 for "On The Backs Of Angels" (from their "A Dramatic Turn Of Events" album) in the "Best Hard Rock/Metal Performance" category.

PERIPHERY's latest album, "Periphery II: This Time It's Personal", which sold nearly 12,000 copies in the United States in its first week of release to land at position No. 44 on The Billboard 200 chart. The CD was released in North America on July 3, 2012 via Sumerian Records and was made available in Europe on July 16, 2012 through Century Media Records. It features guest appearances by John Petrucci (DREAM THEATER), Guthrie Govan (THE ARISTOCRATS) and Wes Hauch (THE FACELESS).