Regarding the band's producer choice, guitarist Michael Stützer said, "We don't wanna use the same producers like all the other Danish metal bands and Søren has done the production of metal newcomer OLIVER WEERS' new record."

He added, "We really wanted a new album out as fast as possible and at the moment we have 6-7 songs ready. So we still have to do 6 more."

In a recent interview with Denmark's Antenna magazine, Morten Stützer stated about the group's new material, "If we look on the overall idea of the new tracks, they're most likely closer to 'By Inheritance' than 'Terror Squad', but it won't be a 'By Inheritance - Part II'. You never know where you are until the album is finally out. You never plan more than you can change while making the album."

Poland's Metal Mind Productions released "One Foot in the Grave, The Other One in the Trash" on June 16 in Europe and August 5 in the USA (via MVD). According to a press release, the DVD features "a fantastic gig the thrash veterans gave at Metalmania Festival 2008. The outstanding guitar play of brothers Stützer, charismatic Carsten Nielsen's powerful drums and the uncompromising thrash energy of Søren Adamsen's voice ruthlessly hammered their way into the hearts of the headbangers assambled on that occasion. ARTILLERY launched a veritable blitz, bombarding their fans with a skull-breaking selection of some of the best songs from their entire discography, including great thrash metal masterpieces like 'By Inheritence' and 'Khomaniac'!" The DVD also includes many great bonus features, such as extra video material: "Allergic to Knowledge" (video clip), "Terror Squad" (video clip), "The Almighty" (bootlegged at The Rock, Copenhagen, 2008), MISSING LINK – "Lobotomized" (video clip), plus interview with Michael Stützer, interview with Morten Stützer and Carsten Nielsen and more. The release is also available in a limited edition — including a CD with songs recorded at the Metalmania Festival. 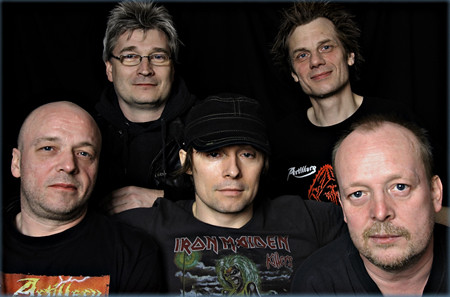