Danish thrashers ARTILLERY have replaced DESTRUCTION on the billing of the "Chris Witchhunter Tribute Concert", which is scheduled to take place on Saturday, April 11, 2009 at Turbinenhalle in Oberhausen, Germany. The event will honor late SODOM drummer Chris Dudek (a.k.a. Witchhunter) and will feature additional performances by SODOM, TANKARD and ASSASSIN, among many others.

DESTRUCTION issued a statement this past weekend blaming the cancellation of their appearance at the "Chris Witchhunter Tribute Concert" on the the "non-professional behavior" of the event's "so-called 'promoter."

According to a posting on the SODOM MySpace page, DESTRUCTION vocalist/bassist Marcel "Schmier" Schirmer wasn't "satisfied with the flyer and poster design [see below]. Regrettably, this discontent had also been discussed on the DESTRUCTION message board and thereby word spread to other forums too. Via e-mail, Schmier let us know that he doesn't want to be 'a support act' with DESTRUCTION and that we 'are supposed to look for someone else!' instead."

In response, DESTRUCTION issued the following statement via the band's official web site:

"To cut down rumors about the cancellation of the Chris Witchhunter tribute show, we need to speak out the truth about the non-professional behavior of the so-called 'promoter.'

"DESTRUCTION agreed to play for free, without any of the normal demands on this charity event, the only demand was a professional poster. After that the wanna-be-promoter took the band off the bill. No communication with the band or the agency, nothing!

"This decision was beyond the band's control and will only hurt the fans and Chris' relatives.

"As a matter of respect for our dead friend, we will not fight this senseless decision in public. The event is a good thing for Chris and his family. Chris would turn over in his own grave after such a stupid act. DESTRUCTION apologizes for this brainless decision of this wanna-be-promoter. Support Chris and his relatives!"

SODOM bassist/vocalist Thomas "Angelripper" Such previously stated about Dudek's passing, "As we recorded 'The Final Sign Of Evil' [2007 LP featuring re-recordings of the material from SODOM's classic first EP, 'In the Sign of Evil', plus bonus tracks], I noticed that Chris was in a very bad condition. It took more than 18 months to finish the recording for this record.

"After Chris had left the band, we didn't meet very often. If you take a look at the 'Lords Of Depravity' DVD, everybody realizes that Chris was really ill and confused. You can also understand why Chris and I didn't have much contact during the last few years. His sickness was a slow process and everybody saw what happened — but Chris never took a helping hand from anybody else. All of Chris' friends will tell you so. The worst thing was that Chris himself never realized the situation he was in and that it was important to accept help from others.

"I hope that all of Chris' friends will help his lovely mom and support her in these dark times. In the beginning of our friendship, she was like my own mom to me. . . I hope that we can arrange a big show for Chris with a couple of friends to give him a special farewell and to make some money for his mother." 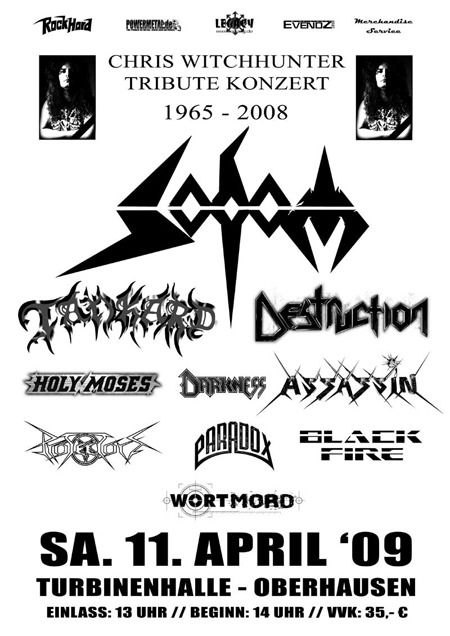