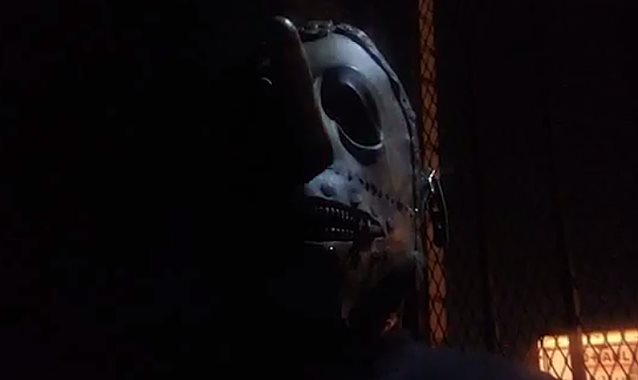 As SLIPKNOT's #3, Chris Fehn is known for pagan rhythms that have ignited audiences worldwide. On Friday, June 13, he goes from drum to canvas with a collection of artwork built from rhythm and fused with hidden imagery to uncover with each viewing. Highly limited in availability, each piece is numbered and individually signed by Chris Fehn.

Check out a trailer beow.

Those interested in learning more about the art and seeing the collection before the release should join the interest list at www.chrisfehnart.com.

SLIPKNOT frontman Corey Taylor said in a recent interview with Pop Culture Madness that fans "will lose their minds" when they hear the band's fifth studio album, due out by the end of the year. Asked what the record sounds like, Taylor explained, "I will say that, at the moment, right now, it feels like a great mesh of [2001's] 'Iowa' and [2004's] 'Vol. 3: (The Subliminal Verses)'. You've got the gorgeous melodies and the artistic direction of 'Vol. 3' and then you've got the absolute brutality of 'Iowa'. And I think people are gonna lose their minds when they hear it."

Taylor told The Pulse Of Radio that the band won't put out the album until it's absolutely perfect. "We want to get it out by this year, let's put it that way," he said. "But knowing the way we work, it probably won't be until the end of the year, which is fine. If not, it might not be until first quarter of next year. But we're really gonna try and push to get it out this year, because this was the year that we were talking about, you know. 2014 was the year, and barring everything that's happened, that's what we're still trying to shoot for."

SLIPKNOT's first all-new album since 2008's "All Hope Is Gone" will also be its first since the 2010 death of bassist Paul Gray and the late 2013 dismissal of drummer Joey Jordison, both founding members and primary songwriters.

The album will also follow the dismissal last month of SLIPKNOT guitarist Jim Root from STONE SOUR, the other band he has been playing in with Taylor for years. Root continues to be a member of SLIPKNOT.