Virginia-based technical death metal outfit ARSIS is preparing to embark on the Thrash And Burn alongside DARKEST HOUR, PARKWAY DRIVE, MISERY SIGNALS, WINDS OF PLAGUE, STICK TO YOUR GUNS, ABIGAIL WILLIAMS, ARSONISTS GET ALL THE GIRLS and AFTER THE BURIAL. Special guests scheduled to appear on select dates include SUICIDE SILENCE, AS BLOOD RUNS BLACK, EMMURE, VEIL OF MAYA, BROTHER VON DOOM and more.

Commented ARSIS bassist Noah Martin: "We're really pumped about this tour. I don't think there's anything that will prevent us from finishing it.

"[Vocalist/guitarist] Jim [Malone]'s over his pneumonia. He's been working out and running, and he feels better than ever. We even have new management that's helping us move forward. They're AMAZING. Hopefully our tour laminates will come with a lucky rabbit's foot! [laughter]

"Right now we're going over to [ANTHRAX singer] Dan Nelson's place to rehearse for about three days before the Thrash And Burn tour starts.

"Our new drummer is Shawn Priest from Idaho. All the best drummers are coming outta nowhere from the Midwest! We screened him through his video on YouTube, and when we hooked up, he learned 'We Are The Nightmare' in a day and a half. We're REALLY excited about this. We're gonna have new drum parts in our songs off the new album. It's gonna be WAY thrashier, more in-your-face. 'Servants To The Night' has been added to the set list because of Shawn. We'd like to keep him on as full-time, so we'll see how he does on this tour. His flight to New York got delayed and he had to sleep in the airport, but he took it like a champ, so he'll fit right in, putting up with a bunch of bullshit right from the start! [laughter] We'll see if we can get him to drink boxed wine.

"First post on Blabbermouth gets a free beer at one of our shows!"

Visit www.myspace.com/arsis to view "In Thrash We Trust" tour dates.

The animated video for the title track of ARSIS' new album, "We Are the Nightmare", can be viewed be viewed below. The clip was directed by David Brodsky (THE BLACK DAHLIA MURDER, SOILENT GREEN, SHAI HULUD) of MyGoodEye.

"We Are The Nightmare" was released on April 15 (North America) through Nuclear Blast Records. The package contains a bonus 45-minute DVD that includes the band's time in the studio, off-stage antics, and some general goofing around. The album was produced by Zeuss (AGNOSTIC FRONT, HATEBREED, MUNICIPAL WASTE) at Planet Z Studios in Massachusetts and was mastered by Alan Douches (KATAKLYSM, UNEARTH, SHADOWS FALL). 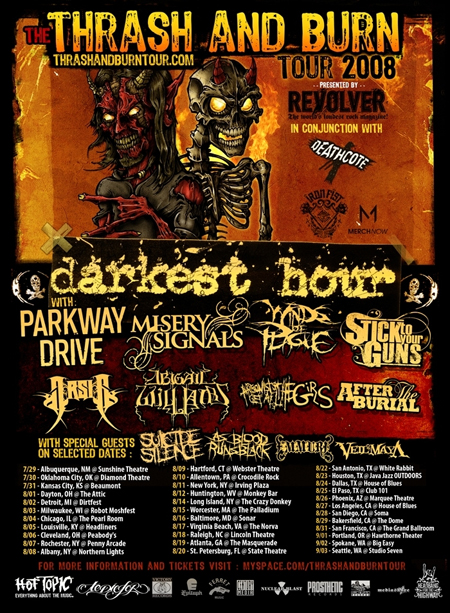