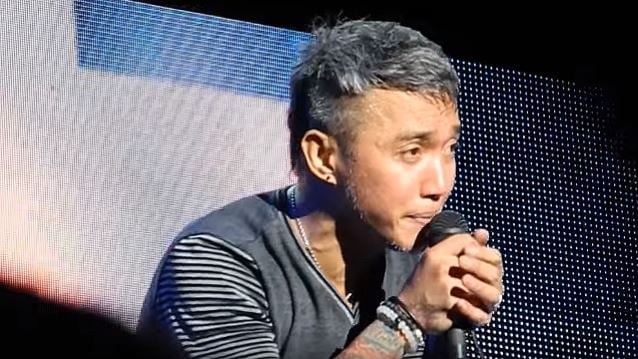 Current JOURNEY singer Arnel Pineda says that he hopes the band will get inducted into the Rock And Roll Hall Of Fame next year so that he can finally get to meet his idol, former JOURNEY vocalist Steve Perry. "I'm longing to at least shake his hand," Arnel told a TMZ cameraman at the Los Angeles airport earlier this week (see video below). "I haven't had the chance for the past nine years."

After confirming that he and Perry never met, Arnel expressed his optimism that JOURNEY will get the nod next April, after being nominated for induction last month."I hope they get inducted into the Rock And Roll Hall Of Fame so maybe I get to see him," he said.

Pineda also said that he doesn't have a problem with the fact that he wouldn't be honored along with his JOURNEY bandmates at a hypothetical induction next year. "It's only for the originals. I'm okay with that," he said.

JOURNEY keyboardist Jonathan Cain recently that if the band ends up getting the final nod for induction into the Rock And Roll Hall OF Fame, Perry needs to come back and perform with the group. Perry left JOURNEY in 1998 rather than be forced into hip-surgery so that the band could tour behind their hit reunion album "Trial By Fire". He's currently prepping his first solo album in over 20 years.

With the classic lineup of the group all currently in JOURNEY's road band — and former keyboardist Gregg Rolie having been brought back onto their radar with his work with Neal Schon in SANTANA — The Pulse Of Radio asked Cain about the chances for Perry to rejoin the band — if just for ceremony. "The door's always been open for him to join us any time he wanted," he said. "I mean, that has to happen. That band has to play. They have to play their music — two songs and I think we get to do two or three. That's how it works."

JOURNEY, YES, ELECTRIC LIGHT ORCHESTRA, PEARL JAM and THE CARS lead the 2017 nominees for the Rock And Roll Hall Of Fame.

Inductees will be announced in December with the induction ceremony set for next April at Brooklyn's Barclays Center. An edited version of the event will later be broadcast on HBO.