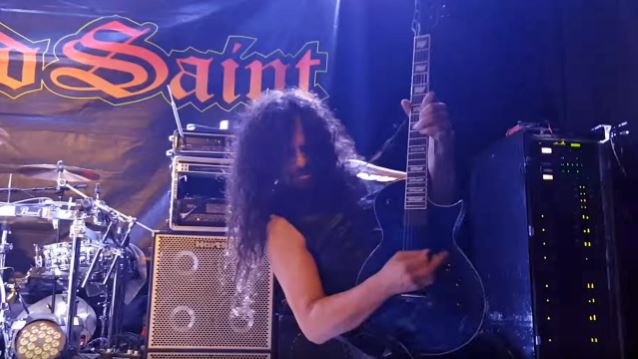 ARMORED SAINT guitarist Phil Sandoval (pictured) will sit out the band's festival appearances in Germany next week so that he can stay home and be with his girlfriend while they expect their first child. The group states: "We have enlisted the help of guitarist Matt Price from BEHOLD! THE MONOLITH to step up and fill in for Phil for these three festivals in Germany.

"Phil will miss seeing all of you this time but he promises to 'deliver' once he returns for the dates we have booked in the fall.

"Please help us wish Phil and his girlfriend a positive and safe delivery."

ARMORED SAINT will join forces with progressive metal veterans QUEENSRŸCHE for a U.S. tour in the fall. The month-long trek will kick off on November 15 in Seattle, Washington and conclude on December 15 in Colorado Springs, Colorado. Also appearing on the bill will be MIDNIGHT ETERNAL.

Regarding the songwriting process for "Win Hands Down", ARMORED SAINT bassist Joey Vera told Metal Forces magazine: "[Singer John Bush and I] always have these discussions — him and I — about what we're gonna do, and the state of the music. We look at our past a little bit, and we look at what our intentions are gonna be. We usually have the same conversation, and it goes something like this. For one thing, we never wanna repeat ourselves. We don't want to just make part two of another record that we made and at the same time; we want to experiment more. We want to push ourselves as far as the soundscapes go, and as far as instrumentation or arrangements go. We never wanna go out and just make a record that is obligatory, you know what I mean? We never wanna feel like we're obliged to please a group of fans, let's say, where all they wanna hear is 'Symbol Of Salvation' over and over and over. We never wanna do that. We always have to make music that's basically pleasing to ourselves first. Now, that's not to say that we are willing to just completely abandon everybody. We are well aware of where we come from and what the lineage is of our group. Once we decided on that, then that's the conversation we continued to remind ourselves of along the way, like, 'How can we make this bigger, better and more interesting? Let's be challenging to ourselves a little bit.' That's usually the conversation we have."