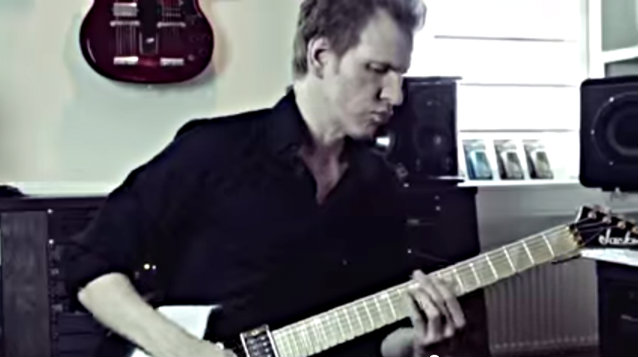 The playthrough video for the song "Equalizer" from ARMAGEDDON, the band led by former ARCH ENEMY guitarist Christopher Amott, can be seen below. The track is taken from ARMAGEDDON's new album, "Captivity & Devourment", which will be released later in the year. The CD was mixed by Fredrik Larnemo at Studio Recordia and mastered at Stockholm Mastering.

The cover artwork for "Captivity & Devourment" was designed by visual master Paolo Girardi, who created this oil painting after reading the album lyrics and story written by Claudius. The group states: "He took his own inspiration and painted a scene of total destruction as described across the album. We thoroughly enjoyed our collaboration with him. We strictly did not want the uninspired digital photoshop album art that is so prevalent these days. This is hand painted visions of a man inspired by music."

Amott's latest solo album, "Impulses", can be purchased directly from his music store.

Christopher Amott started his career in music in 1995 as a founding creative force and guitarist in ARCH ENEMY. In this context, he is known for his tastefully technical guitar work and memorably emotive playing style.

After garnering his early success, Christopher had the desire to express himself on a personal level in the same genre. At this time he began writing albums under the name ARMAGEDDON. Christopher wrote and recorded three albums over the next few years as ARCH ENEMY grew into an internationally recognized act, with his compositions featuring his own vocal stylings on the last album. This would be Christopher's first foray into singing and a spark of inspiration for his later musical ventures.

In 2008, Christopher began to consider his creative options as a mature musician. He began writing songs of an entirely different atmosphere, which saw his guitar playing focused less on technical ecstasy and more on a chord-based blues rock ambience as a foundation for more prominent vocal and lyrical ideas. These compositions developed into his next solo project; the album would be called "Follow Your Heart", released under his own name in 2010.