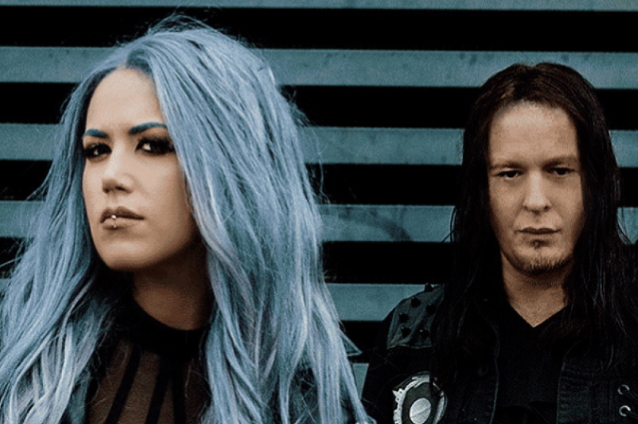 One of the most outspoken vocalists in heavy metal, White-Gluz found herself at the center of a couple of controversies in the past year. First, she engaged in a war of words with a concert photographer after she allegedly posted one of his photos of her online without his permission. Then, more recently, she was accused by the singer of her former band, THE AGONIST, of trying to hold the group back in the five years since her departure from THE AGONIST.

Speaking about the way Alissa has been portrayed in the metal media, Michael said (hear audio below): "Yeah, it's very unfair towards Alissa, I feel. Recently, there's been a few very unfair things — unfair towards her. I know her quite well now, after spending five years on the road with her and working with her very closely. But it's always gonna be more interesting when, one, she's female; [two], she's in one of the most popular metal bands; three, she's very vocal about certain issues, like veganism and stuff like that. But that's very positive, and she can use social media to her advantage to spread that message. But there's a backlash sometimes, and it's a back-and-forth; so, it can swing both ways. Those are the times we live in.

"I don't really have any advice for her or anybody else," he added. "She's doing a great job doing what she does, and I respect her tremendously."

Amott also talked about how the clickbait culture has affected the world of heavy metal journalism, with outrageous headlines and stories being used to attract visitors, and many readers focusing only on the headlines without reading the full article, particularly if it's shared through social media sites.

"What is pretty scary — well, not scary; it's just sad… Because people, they just read the headline and they don't even read the story, and then if you scroll down and read the comments, it's, like, they're reacting [to] the headline, not on the actual [contents of the article], because they probably don't have the patience to read, or they can't read," he continued.

"I'm a big research guy; I like [to know] the whole story… I don't like to have just a knee-jerk reaction. I've never commented on anything online… [not even on my] own pages. I've [thought about commenting], but then I have to stop myself, because that's what they want. And you realize, 'Oh, shit. They almost got me.' [Laughs]

"At the same time, there are bands that put out great music and they don't have any followers on their social media platforms, or they don't get any comments on these metal news web sites when they announce they've got a new album," he added. "Or they do an interview and it's not even picked up by these metal news web sites. So, in that way, I guess you've gotta take the good with the bad."

ARCH ENEMY is continuing to tour in support of its latest album, "Will To Power", which was released in 2017 via Century Media. The effort marked the second ARCH ENEMY album since the departure of longtime singer Angela Gossow and addition of White-Gluz. It was also the first ARCH ENEMY disc to feature former NEVERMORE guitarist Jeff Loomis, who joined the band in late 2014.