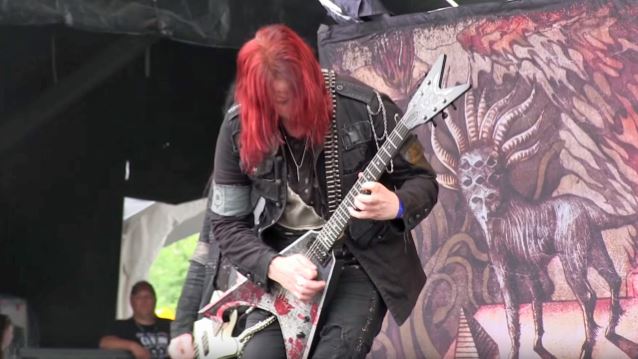 ARCH ENEMY guitarist Michael Amott was interviewed on the August 14-16 edition of Full Metal Jackie's nationally syndicated radio show. You can now listen to the chat using the Podbean widget below. A couple of excerpts follow.

Full Metal Jackie: Michael, it's been a year since the [release of "War Eternal", the] first album with [singer] Alissa [White-Gluz]. How will the bonding of this past year together make the next album different?

Amott: Oh, well, I don't really know. But, yeah, there's been some bonding going on [laughs], and we're having a lot of fun and it's just really gelled into a really great friendship and a really healthy working environment. Yeah, I mean, it's too early to say what's gonna happen on the next album. But I think we're all really excited about… whenever we do get back together to do that. We'll probably take some time off [after] this touring [cycle]… 'Cause, I think, once we've wrapped up this tour, it's gonna be, like, a two-year tour that we've gone all around the world. And I think we'll need some time to, kind of, just collect our thoughts, have some real time off and, kind of, get hungry again. And then we'll be back at it, writing new music and putting all that together.

Full Metal Jackie: What's been the biggest way that [the addition of former NEVERMORE guitarist] Jeff Loomis has affected the band?

Amott: Just his wonderful, flowing blond locks are just a pleasure to be around. [Laughs] Other than that, I'd say… I've known the guy for, I think, 16 years and he's just a really good friend. And we get on fanatically on stage and off stage, which is equally as important. He's just come in with a really positive attitude and a real… He's just a great, accomplished guitar player, of course, as everybody knows. He's just got such a nice way about him as well. He's a world-class musician with virtually no ego and just a very relaxed attitude. And we're having so much fun, and… I don't know... It's just been very uplifting to have him around.

Full Metal Jackie: How much do you think about the next album and write music on the road?

Amott: We do a lot of jamming backstage, and we stumble across little fragments of ideas that we record immediately and, kind of, hold on to for the future. But, you know, we don't really write whole songs [on the road]. I have written what would be the skeleton of two songs, and I actually demoed those as well with our drummer, Daniel [Erlandsson], but that's the only, sort of, thing that we have at the moment. There's not a whole lot right now that's, like, finished music. And we don't do a lot of serious writing [while on tour]. I'd rather get to that a bit later on, once we have time off. I just like to separate it. We're very much in tour mode right now, and that's what we're focusing on.

ARCH ENEMY is headlining the 2015 installment of "Summer Slaughter". This tour marks the band's second North American run on this album cycle — but the first stateside trek to feature Loomis.