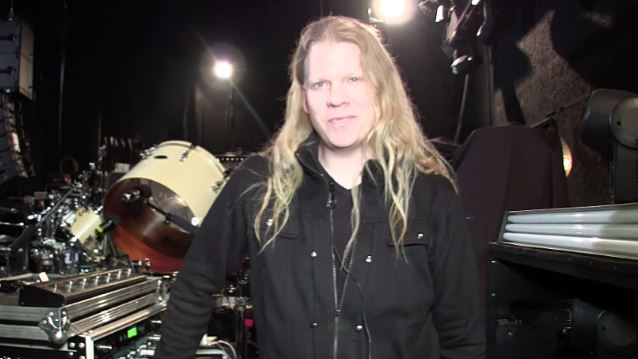 On December 8, former NEVERMORE and current ARCH ENEMY guitarist Jeff Loomis gave Kemper a rundown of his Kemper Profiler profiling amp at Docks in Hamburg, Germany during ARCH ENEMY's European tour with KREATOR. Check out the footage below.

ARCH ENEMY in November parted ways with guitarist Nick Cordle and replaced him with Loomis. Loomis made his live debut with ARCH ENEMY on the band's European tour, which kicked off on November 26.

"Jeff Loomis is one of the best guitar players in the metal world, in my opinion, as well as being a longtime friend. I look forward to tearing it up on stages around the world together as we continue on the 'War Eternal' touring cycle throughout all next year and beyond!"

ARCH ENEMY played its first show with new singer Alissa White-Gluz on May 23, 2014 at Turbohalle in Bucharest, Romania. Angela Gossow, who joined ARCH ENEMY in 2000 and made her debut on the now-classic "Wages Of Sin" (2001), stepped down as frontwoman and is focusing on management, while Alissa is taking her place.