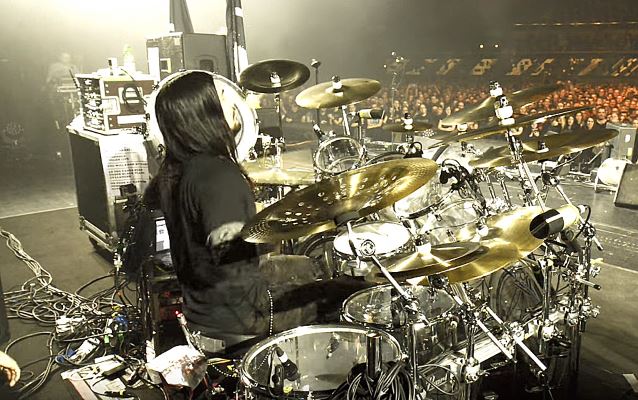 Drumtalk has uploaded drum-cam footage of ARCH ENEMY's Daniel Erlandsson performing with his bandmates on December 4, 2015 at Jahrhunderthalle in Frankfurt, Germany during their tour with NIGHTWISH and AMORPHIS. Check out the clips below.

Asked about ARCH ENEMY's plans for the coming months, guitarist Michael Amott said at last month's NAMM show: "We're kind of slowing down a bit. We just did put out a new album in 2014 called 'War Eternal', and it did very, very well for us all over the world, and we just completed a three-hundred -date world tour. So three hundred shows is a lot, and we're kind of feeling… We're slowing down a little bit now. We're kind of gonna take a bit of a break and, yeah, just write some new music… I always write music. There's bits and pieces floating around on various laptops and phones and just up here [points to his head]. So, yeah, we're gonna try to put that all together. But, you know, I'd rather make an album when we have something to say as a band. I just don't wanna be on a schedule and like, 'It's gotta be out by that time next year,' and work towards… I'd rather have good music and then start thinking about making a new album."