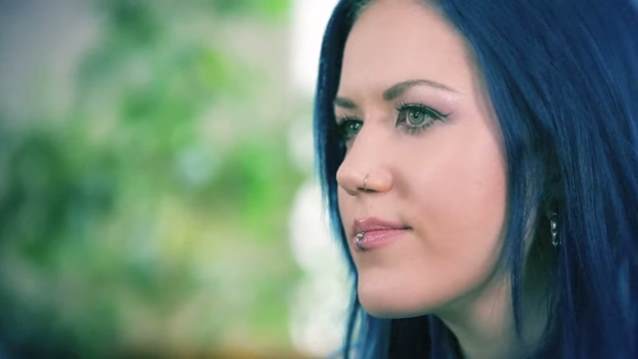 ARCH ENEMY vocalist Alissa White-Gluz, who has been performing with broken ribs after crashing into a stage riser during the band's current European tour, recently spoke to OC Weekly about the incident that caused the injury: "I guess I went a little too hard at one of the first shows and actually broke the stage riser into a bunch of pieces. I landed on the pieces of steel and wood, which then stabbed me a bit. I hit my head, shins, elbows and my ribs. Fortunately, most of my body is OK, but my ribs are severely bruised and there is a compound break as well. I'm just finding ways of coping with the pain on stage, and just resting as much as possible when I'm not on stage. The first few days I thought it was fine, but a few days later it was really swollen and it hurt to breathe and move. I was still going on stage though. I had a friend there that was able to take me to the emergency room and translate everything for me. I got X-rays, an ultrasound and blood tests. The doctor wanted to give me injections of morphine and said I absolutely could not perform. There is also no organ damage, which is something I was worried about because the broken rib is right next to the liver. My head is fine; I don't have a concussion."

She continued: "You can't really do anything to heal the compound fracture in the rib other than just wait. I'm straight-edge and I'm really opposed to animal testing so I told them I didn't want any morphine. I know it's nearly impossible to find pharmaceuticals that are not tested on animals so I'm really trying to deal with the pain holistically.

"Adrenaline really numbs out all pain. When I'm on stage, I don't feel it unless I do a really stupid move. I'm diving into my yoga breathing and take a mind-over-matter approach to it. It's definitely some of the worst pain I've ever felt. It sucks because I can't move around the way I want to on stage; I can't be as energetic as I want to be. I can't work out.

"I never even considered canceling any shows. The band saw me fall and just told me not to slow down and keep going. I've been icing it in between songs and during guitar solos.

"Canceling shows is not really an option. It's not an injury that's going to heal overnight anyways so there is no point in canceling a bunch of shows. I'm just trying to give as good of a performance as I can."

Asked if she was nervous to encounter the polarization from fans after replacing ARCH ENEMY's longtime singer Angela Gossow, Alissa said: "So far it's been overwhelmingly positive. I know it's possible that some people will only want to see Angela and will have no interest in the band without her. There's nothing I can do about that, she retired and that's just how it is."

She added: It's actually a unique situation I am in that is pretty ideal. I'm getting to front and participate in a band that is really respected and broken down a lot of boundaries in terms of the metal world. I get to do it without stepping on anyone's toes and without hurting anyone. Especially since she asked me herself so it's a great situation. I'm thankful to be in this edition. I'm not too worried any sort of polarization, like you said."