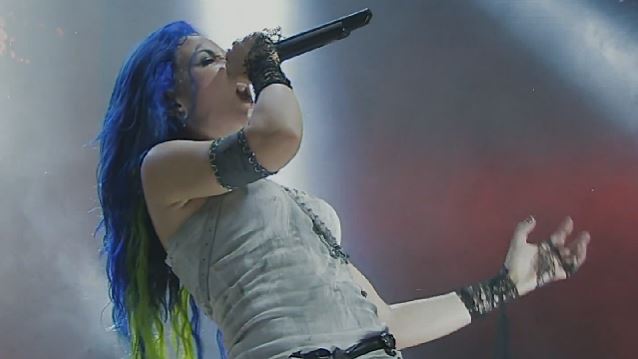 In a brand new interview with the Phoenix New Times, ARCH ENEMY's new Canadian singer Alissa White-Gluz was asked to name one of the most challenging things she has encountered as a woman in heavy metal.

"You know, there's things you face every day as a woman, even if you aren't a singer or entertainer," she responded. "Women in general have to think about certain things that men don't — like being safe in the street at night or something. But I think particularly being a woman in metal... maybe there is a tendency to doubt our authenticity, you know? Like no one would really question the reason for a guy to be in a band, but I think, starting out anyways, there was always that usual question: 'Why are you doing metal?' and I'm, like, 'Why are you asking that question?' I think that is probably one of the tough ones."

Speaking to Metal Blast earlier in the year, Alissa talked about the objectification that's inherent in the marketing of female-fronted metal bands and whether she views it as a problem.

"I think it's a problem and a solution, you know what I mean?" she said. "I think it's a problem because people should just be listening to the band, and appreciate the music and the musicians for their talent and abilities. It's also a solution, in a way, because it's, like, 'Well, look, girls can do it too, girls can do whatever the guys can do!' And we can 'look hot' doing it; we don't have to be like men, we don't have to look like men, smell like men, or act like men to do it."

She continued: In a way, I think that it's empowering for women to put their foot down and be, like, 'I'm going to dress however I want, I'm going to look however I want. If I want to look sexy, I'm going to do it, and you're still going to listen to my music because it's fucking good music!' On the other hand, it sort of gets tiring sometimes, and I just want to sort of be, like,'Okay, I'm just going to put on a big snowsuit, don't look at me anymore, just listen to my fucking music, get over it, I'm a girl.'

"It's a double-edged sword, but I think in the past 10-20 years, women have evolved a lot in the music industry, to the point now that I don't think it's such a novel thing to have a girl in your band."

Asked if she feels that record companies rely too much on cheap exploitation of women performers in order to get more media coverage and video views, Alissa said: "I think it's only exploitation if they're doing something that the band doesn't want to do. If any female, or male, does something in order to get 'likes' on their video, or to get fans, they're being exploited and they're actually selling out to a certain extent."

She continued: "In my experiences with the 'Hottest Chicks' [issues of Revolver] magazine, or whatever, I always just gave them a photo that a friend of mine took of me, or something like that. I never really did anything that I didn't want to do.

"As long as people realize what it is, and take it with a grain of salt, then it's not really a problem.

"Personally, I would never use sexuality or looks as a selling point.

"I think image is important, but I don't think it's a selling point. I think it's just something that comes along with being in a band."

ARCH ENEMY's new album, "War Eternal", sold around 8,000 copies in the United States in its first week of release to enter The Billboard 200 chart at position No. 44. The CD was released on June 10 in North America via Century Media Records. The cover artwork was created by Costin Chioreanu.