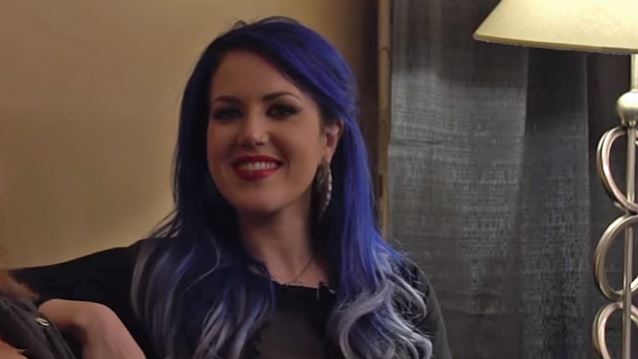 Revolver TV's Zeena Koda conducted an interview with singer Alissa White-Gluz of ARCH ENEMY at the Schecter Guitars 2016 NAMM party on January 23 in Anaheim, California. You can now watch the chat below. A couple of excerpts follow (transcribed by BLABBERMOUTH.NET).

Alissa: "We're gonna do a little tour in Mexico — just like a short tour in Mexico — and then I'm gonna head back to Montreal. And we're all gonna be in our respective hometowns writing music and working for the next ARCH ENEMY album. I don't think any of us wanna release something that we're not happy with, so we'll have to make sure we have enough material that we're happy with, but that shouldn't be a problem, 'cause almost every time they present me with a guitar riff or something for me to build a song on, I'm always, like, 'Pfffttt… This is so good.' So I don't think it'll be a problem."

On what ARCH ENEMY fans would be most surprised to find out about her:

Alissa: "Probably that I have social anxiety, I think. Yeah, it's funny, because I think that's pretty common in musicians, actually, but from the outside, people would never think that you could do the job of a musician if you have that. But, I mean, it was crippling at one point. Now I'm okay with it. A lot of my musician friends have the same kind of anxiety and panic when faced with crowds of people, and I do too. And I don't think people would think that, but I do, and I really have to fight against that whenever I'm in a situation of meeting people, which is pretty embarrassing to say, 'cause I meet people every day. And you know what's weird? I didn't have it before I started touring. It's like the touring caused it. That's the thing: when I'm on stage, I don't care; there could be ten people there, there could be ten million people there. But if I'm offstage, I'm, like, counting the people, I know exactly where everyone's standing, how far they are from me. So it's a very different thing, actually. I think it's pretty common, actually, in musicians. You wouldn't think, but I know a lot of people that have the same sort of thing going on. So, yeah, if ever I have a resting bitch face when you see me, it's not because I'm a bitch; it's because I'm afraid and I don't know what's going on."