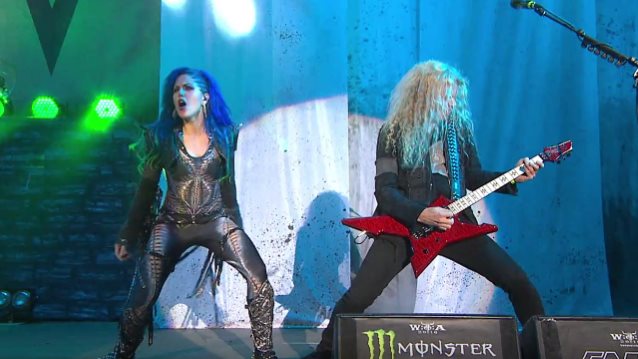 ARCH ENEMY will release a new live DVD, "As The Stages Burn!", on March 31, 2017 via Century Media. The set contains video footage of the band's largest stage production to date from their performance last summer at the Wacken Open Air festival in Wacken, Germany. This performance marks the pinnacle of a highly successful album campaign in support of "War Eternal". It all began in March of 2014 when the band announced new vocalist Alissa White-Gluz as well as the video for the album title track, "War Eternal". This debut track went on to become the bands most successful video in their career, surpassing 20 million views on YouTube. The release of the "War Eternal" album also saw ARCH ENEMY reaching their highest U.S. and German chart positions to date while going on to play over 200 shows in over 40 countries around the world. In late 2014, Jeff Loomis (ex-NEVERMORE) joined ARCH ENEMY during the world tour with KREATOR and in 2015 they played arenas as direct support for NIGHTWISH.

A performance clip of the song "Ravenous", taken from "As The Stages Burn!", can be seen below.

Added Loomis: "I think the writing process is gonna be awesome between us. It's just like Mike said — we really haven't had a lot of time to sit down together yet, but I think that time is gonna be coming soon."

Regarding the expectations for ARCH ENEMY's next album, Alissa said: "I think that for all of us, with any new album, or even just with any show, it's always a challenge to do better than the last time. And I think that we all love 'War Eternal' and it's always gonna be super special to us, but we still wanna do better this time. It's just a matter of always keeping very, very high standards and being critical on yourself but in a constructive way, so that you can always produce good music and good performances. I don't think any of us are complacent when it comes to the quality of music that we've put out. I don't think we have any specific ideas in mind for things that we have to achieve within the album, but we have a really strong lineup here that's capable of putting together a really solid album. So we're all pretty excited about it… Let's not forget also that we have Jeff here for the writing process of this album, which we didn't have with 'War Eternal', so right there we have a whole new world to explore. So that's pretty exciting too."