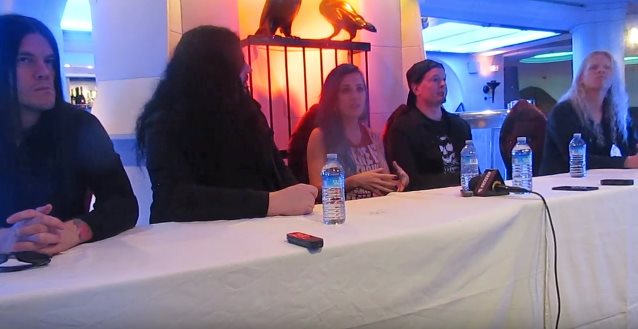 The five members of ARCH ENEMY took part in a press conference aboard this year's 70000 Tons Of Metal cruise, which set sail February 2-6 from Ft. Lauderdale, Florida to an all-new Caribbean destination: Labadee, situated on the northern coast of Haiti. You can now watch the question-and-answer session in two parts below.

Regarding the musical direction of the new ARCH ENEMY material, Michael said: "It's very diverse, I think, the material. It's got a lot of trademark ARCH ENEMY elements, I guess. I can think a song is really, really different, but then we're gonna play it, it's gonna be us playing it, Alissa [White-Gluz] singing, it's gonna sound very, very ARCH ENEMY. So it's not like a huge departure, but it's definitely the next… I think we're more relaxed, maybe, than on the last album… 'Cause Alissa's been with us for three years, and it's not as tense, maybe, as it was the last time around. [Before we released 'War Eternal'] we were, like, 'We don't even know if people are gonna like this, if people are gonna accept us, ARCH ENEMY, with a new singer.' We didn't really know, which made the songs maybe more… To me, 'War Eternal' has a very kind of dark and very angry and claustrophobic feel to it, which is really cool. But I think the new one is gonna be more open and probably more powerful, actually."

ARCH ENEMY will release a new live DVD, "As The Stages Burn!", on March 31 via Century Media. The set contains video footage of the band's largest stage production to date from their performance last summer at the Wacken Open Air festival in Wacken, Germany. This performance marks the pinnacle of a highly successful album campaign in support of "War Eternal".