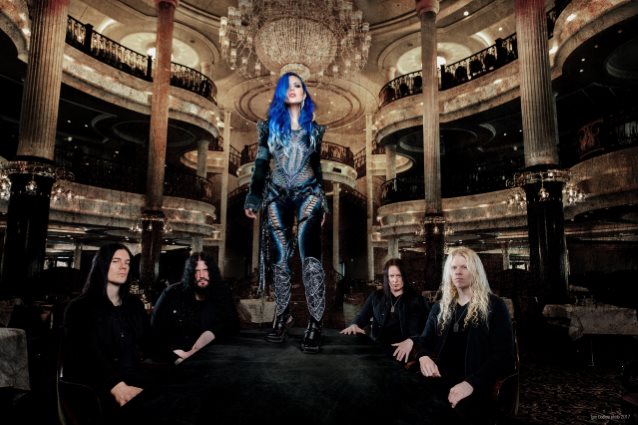 Extreme metallers ARCH ENEMY will release their tenth studio album, "Will To Power", on September 8 via Century Media Records.

Commented guitarist Michael Amott: "After many months of writing and recording in the studio, we are delighted to have finally completed work on our tenth studio album, 'Will To Power'. We are looking forward to sharing new music with you soon. We are equally excited to announce the first leg of our 'Will To Power' world tour... Can't wait to play new and old songs for our fans. See you all soon!"

"Will To Power" will mark the second ARCH ENEMY album since the departure of longtime singer Angela Gossow and addition of her replacement, former THE AGONIST frontwoman Alissa White-Gluz. It will also be the first ARCH ENEMY disc to feature guitarist Jeff Loomis (ex-NEVERMORE), who joined the band in late 2014.

ARCH ENEMY bassist Sharlee D'Angelo recently told Metal Wani about the band's upcoming follow-up to 2014's "War Eternal": "On 'War Eternal', there was a certain desperation about that album. But I still can feel it when I listen to it, maybe because I was involved in it. Having lost a longtime, very important member of the band and introducing someone else, a new face into the band, and you wonder, that's even more, like, 'Okay, we have a new album. I wonder what people will like about it, or if they will like it at all.' There's a few nerves there. In the process of recording that album, writing and recording, there was so much going into… There's something desperate and very dense about that album. Now, we know we did it. We're still here; people have accepted the change and embraced Alissa and everything as well. Things are better than they were before, so now you have a completely different vantage point and starting point, for that matter."

He continued: "This album is a bit more open in that sense. It sounds more open and some of the songs I would say, dare I use the word 'epic'. [Laughs] It's different, yes, we can do a lot more now than we could… We just don't have to cram as much metal as possible in the most sort of 'energetic' way. We can do it in other ways as well. Don't be scared, I'm not saying everything will be slow; that's not what is happening. It's extremely ARCH ENEMY, but within what it is ARCH ENEMY, we have gone out to explore new worlds. It will be some of the same and also some new stuff."

Amott told Rock Hard magazine in January that Loomis — who was the main songwriter in his former band NEVERMORE — has not contributed to the songwriting on the group's new disc.

Back in December, Loomis told Metal Wani that he would "probably just be doing solos" on ARCH ENEMY's upcoming album. He explained: "If you look at it, ARCH ENEMY is Michael Amott — it's his band, it's his baby, and he is the main songwriter in the band. I did submit a few songs, and I don't know if they'll make it or not. But I definitely will be playing solos on it."

He continued: "I love being in the band. I am fan of the band. I love the music, and I love playing in front of thousands of people with that band. But we'll see what happens. It's kind of the same thing if you can think the same way with NEVERMORE; me and Warrel [Dane, vocals] were the main writers in that band, and we had a revolving door of guitar players. But pretty much, it was me and Warrel that did a lot of it. Steve Smyth wrote a little bit, Tim Calvert wrote for 'Dreaming Neon Black', but most of it, eighty percent, was me and Warrel. So each band has their own chemistry and their way of doing things."