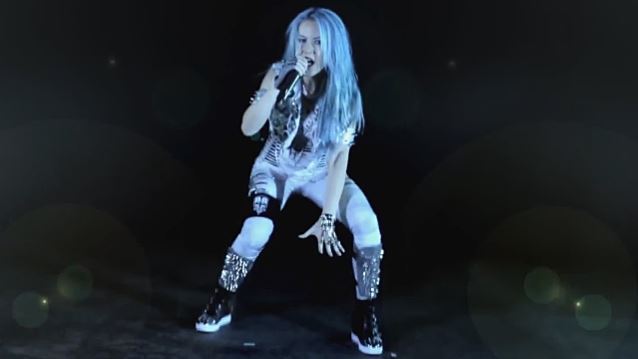 The official video for the song "Stolen Life" (2015 version) from Swedish / Canadian / American metallers ARCH ENEMY can be seen below. This brand-new version of the track, which has just been made available digitally, features additional lead/solo parts by new ARCH ENEMY guitarist Jeff Loomis (formerly of NEVERMORE).

The "Stolen Life" video was directed and produced by Carlos Toro V. of Abysmo Films. It was filmed in Chile during ARCH ENEMY's early 2015 tour of South America.

The original version of "Stolen Life" can be found on ARCH ENEMY's latest album, "War Eternal", which sold around 8,000 copies in the United States in its first week of release to enter The Billboard 200 chart at position No. 44. The CD was released on June 10, 2014 in North America via Century Media Records. The cover artwork was created by Costin Chioreanu.

Comments ARCH ENEMY guitarist Michael Amott: "I can't believe it's been almost a year since we released the 'War Eternal' album! Time flies when you're having fun, huh?!

"We're just starting up our summer tour here in Europe and there's still a long way to go — we're booked up 'till Christmas!

"There has been such an amazing reaction to the new music and lineup and it is really keeping us motivated.

"Having Jeff Loomis out with us on the road is fantastic. A fine player and a true gentleman. I'm super happy that he could throw down a couple of leads on this new exciting version of 'Stolen Life'; it really adds some new fire to the song.

"On our recent tour in Latin America, we had the opportunity to film a video for our new single. It was a really good experience working with the talented Abysmo team and I'm more than happy with the end result!"

ARCH ENEMY in November 2014 parted ways with guitarist Nick Cordle and replaced him with Loomis. Loomis made his live debut with ARCH ENEMY on the band's most recent European tour.