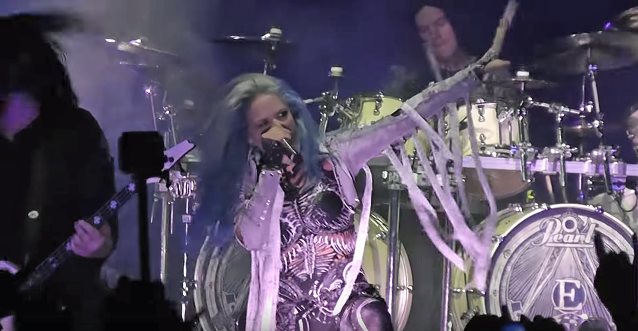 ARCH ENEMY performed its new single, "The World Is Yours", live for the first time on Friday, August 4 at the Rock Pod Kameňom festival at Sninské Rybníky, Snina, Slovakia. Fan-filmed video footage of the live premiere can be seen below.

"The World Is Yours" is taken from ARCH ENEMY's new album, "Will To Power", which will be released on September 8 via Century Media Records. Co-produced by guitarist Michael Amott and drummer Daniel Erlandsson, the disc was mixed and mastered by longtime collaborator and friend Jens Bogren (OPETH, AT THE GATES, DIMMU BORGIR). The disc's captivating cover artwork was designed by Alex Reisfar.

ARCH ENEMY and TRIVIUM have announced plans for a co-headlining tour across North America this fall. Featuring support from English metalcore outfit WHILE SHE SLEEPS and New Jersey deathcore act FIT FOR AN AUTOPSY, the trek will kick off on October 27 in Orlando, Florida and make its way across the U.S. and Canada before finishing on December 6 in Houston, Texas.