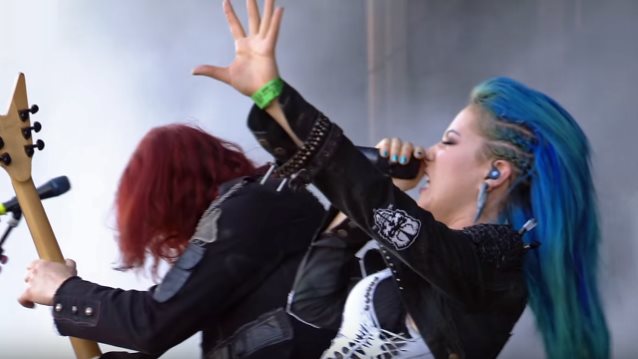 Asked about ARCH ENEMY's plans for the coming months, guitarist Michael Amott said: "We're gonna release a live release — you know, a live album, a live DVD, live Blu-ray, whatever… all that whole thing. That's gonna be a very elaborate package, with a lot of bonus material and kind of telling the story from our two-year-old 'War Eternal' story. So that's a very exciting project, of course. And then we're also working on new songs. A new album is sort of there, somehow. We have about seven or eight new songs."

He continued: "We've just taken six months off the road, so we used some of that to write new material. I've been writing a lot, as I always have, and, of course, Alissa [White-Gluz, vocals] is still writing lyrics. And I've been writing with Jeff Loomis [guitar, ex-NEVERMORE] as well, our latest addition to the band. [I'm] very excited about that."

Amott also talked in more detail about the ARCH ENEMY songwriting process. He said: "We still do it the old-school way. We do some individual writing, but then it's not really an ARCH ENEMY song until everybody's jammed on it in our rehearsal room.

"We're in a fortunate position where we can still afford to hang out together and write music together in a room. And I think that's important for the true metal spirit. That's how I grew up playing, so I'm not really into only sending files on the Internet. I think we all much prefer to jam."

As previously reported, ARCH ENEMY will put on the biggest stage production of its career at the Wacken Open Air festival on Saturday, August 6 around midnight, making this the pinnacle of a highly successful album campaign. It all started in March 2014 when the band announced the new singer Alissa White-Gluz and the video for the album title track "War Eternal", which became the most successful video in the group's career and reached close to 20 million YouTube views.

The "War Eternal" album reached the highest U.S. and German chart positions in ARCH ENEMY's career and the band played over 200 shows in over 40 countries around the world. In late 2014, Jeff Loomis (ex-NEVERMORE) joined ARCH ENEMY during the world tour with KREATOR and in 2015 they played arenas as direct support of NIGHTWISH.

Wacken Open Air won't be the last "War Eternal" show — dates are currently booked through the end of September, including a run of four U.K. headline shows this month — but it's going to be something very special.

In a recent interview with Roppongi Rocks, former ARCH ENEMY singer Angela Gossow, who is still involved in the band's management, ruled out a possible return to the group for some special appearances. She said: "For me personally — and the band — it's too early to consider. We've been asked a couple of times, but for the time being, it's a definite no."

ARCH ENEMY was rejoined by the band's original members Johan Liiva (vocals) and Christopher Amott (guitar) for their appearance at last year's edition of the Loud Park festival in October at Saitama Super Arena, Saitama, Japan.