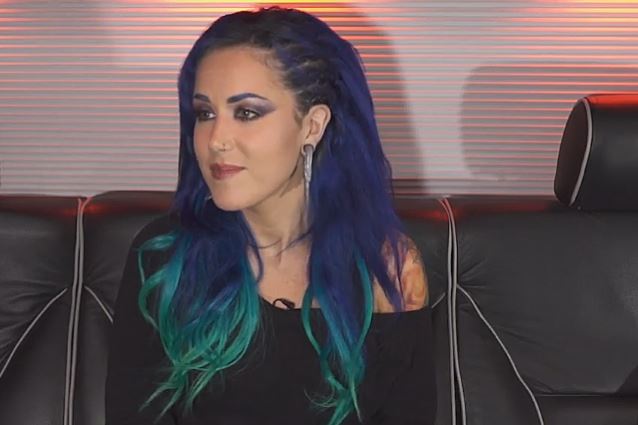 Dukascopy TV recently conducted an interview with ARCH ENEMY frontwoman Alissa White-Gluz. You can now watch the chat below. A couple of excerpts follow (transcribed by BLABBERMOUTH.NET).

Alissa: "I think there's a few factors that made 'War Eternal' as successful as it is. One of them would be that we had just great musical chemistry, all of us in the band together. Another thing would be that, for Michael [Amott, guitar] as the main songwriter, he just lost a very important element of his band [previous singer Angela Gossow], so the pressure was on to make great music. And for me, I had just been kicked out of my previous band [THE AGONIST] that I had invested twelve years of my life into, so the pressure was on for me to be able to make music that I was happy with and that would allow me to continue performing. So both of us had really, sort of, stressful life situations going on that we really felt motivated us to really, really put a lot of passion and effort into our songwriting. And so I think that translated in the album. And I think that there's a certain part of every… just in human nature that likes to see someone kind of fail, and I think that curiosity made people really interested in, like, 'Okay, well, let's see what they whipped up.' But then… I mean, most people were pleasantly surprised."

On what fans can expect from ARCH ENEMY's next album:

Alissa: "Now we actually have even a newer addition to the band, which is Jeff Loomis [ex-NEVERMORE] on guitar, so fans can look forward to hearing his soloing style on the album. I'm really excited to hear his contributions to the album as well. I think he really inspires Michael and vice versa. Even in just the backstage, they're always jamming together and writing stuff together. We also have Sharlee [D'Angelo, bass] and Daniel [Erlandsson, drums], who also both play guitar, so they also write riffs and help to arrange songs and stuff like that. And, you know, with every year that passes, as human beings, we experience new things and new thoughts, and I always put those down in poems, so I have a collection of poems that I can turn into lyrics for the upcoming album as well. We all have new things that we learn as we get older, and always try to bring that in, all while maintaining the sound that is ARCH ENEMY, that ARCH ENEMY fans know and love, because that's what we know and love too. We don't wanna change the sound completely, but we're obviously open to incorporating new sounds."

On feeling the pressure of following up "War Eternal":

Alissa: "I really wanna make really good-quality music. That's the thing for me — I don't wanna just [have the attitude], 'Oh, I'm sure they'll like it,' and release whatever. For me, it has to be stuff that I totally love, because if I don't totally love it, I'm a really bad liar [laughs], and I know that the fans are gonna see that. So I just wanna make sure that on my solo album and on the next ARCH ENEMY album, only the best, highest-quality music will be released."

ARCH ENEMY will release a new live DVD, "As The Stages Burn!", on March 31, 2017 via Century Media. The set contains video footage of the band's largest stage production to date from their performance last summer at the Wacken Open Air festival in Wacken, Germany.