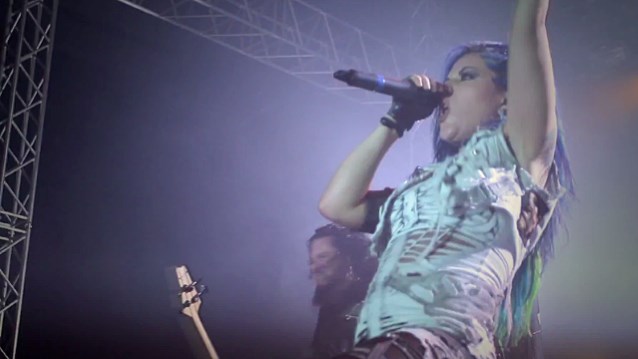 A trailer for ARCH ENEMY's upcoming European tour, featuring the first official performance footage with the band's new guitarist, Jeff Loomis (ex-NEVERMORE), can be seen below.

Speaking about ARCH ENEMY's musical chemistry, the band's guitarist and main songwriter Michael Amott told Chile's On The Rock: "I would describe it as good. I think there is chemistry. Sometimes bands don't have any chemistry anymore, or they never had it, but they just do it anyway."

He continued: "Yeah, for me, music and songwriting is a one-hundred-percent emotional experience. It's not really a calculated or… I don't really know a lot of [music] theory or anything like that; I just kind of go straight in with my heart and soul and just try to create cool music that sounds cool to my ears. I think it's what we all do, and we just kind of put it together.

"A lot of the initial ideas come from myself, but we kind of shape it all together. It's not really a song until everybody's played on it and put their touch on it; that's when it's an ARCH ENEMY song. I think now, with [new singer] Alissa [White-Gluz], she did a killer job. I co-wrote with her on the [latest ARCH ENEMY] album ['War Eternal'] lyrics. There's a good vibe right now, and I think we're getting really strong feedback from the audience as well about our live performances now. I think everything's kind of gelling. And I'm really looking forward to the next album at some point and working with Jeff as well, which is something that I'm really looking forward to. So the possibilities are kind of, like, pretty crazy."

ARCH ENEMY in November 2014 parted ways with guitarist Nick Cordle and replaced him with Loomis. Loomis made his live debut with ARCH ENEMY on the band's most recent European tour, which kicked off on November 26, 2014.

ARCH ENEMY played its first show with Alissa White-Gluz on May 23, 2014 at Turbohalle in Bucharest, Romania. Angela Gossow, who joined ARCH ENEMY in 2000 and made her debut on the now-classic "Wages Of Sin" (2001), stepped down as frontwoman and is focusing on management, while Alissa is taking her place.