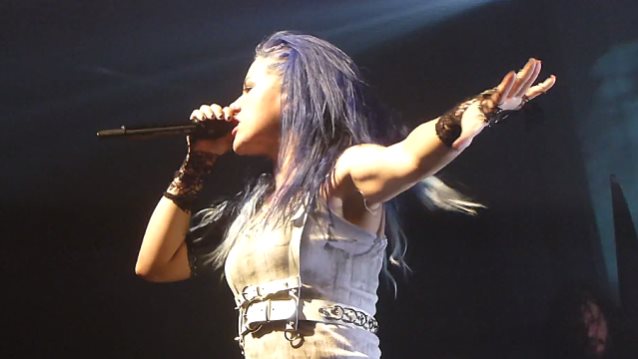 Fan-filmed video footage of ARCH ENEMY's June 3 performance at Le 106 in Rouen, France can be seen below.

ARCH ENEMY vocalist Alissa White-Gluz has been performing with broken ribs after crashing into a stage riser during the band's current European tour. She explained in an online posting: "Anyone at that show who saw me body slam through the fucking riser could imagine there would be some damage. But I'm a stubborn fuck and I waited a few shows before going to get x-rays, ultrasounds and blood tests. The damage to my head, arms and legs is just bad bruising, there is no apparent organ damage and no internal bleeding. Unfortunately, there is a compound break on one rib and severe bruising around several others. Good news is that the pieces of the rib are well aligned to heal back in place!" She added: "The doctor forbade me to continue playing shows… But cancelling shows would hurt way worse."