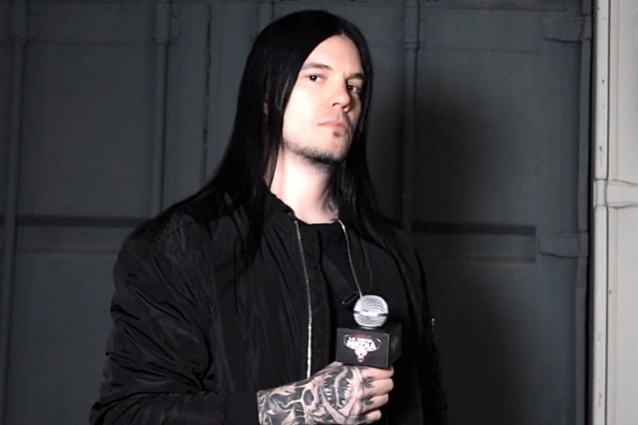 Prior to ARCH ENEMY's October 26 performance in Hollywood, California, drummer Daniel Erlandsson spoke with Allie Jorgensen of LA Metal Media. The full conversation can be seen below. A few excerpts follow (as transcribed by BLABBERMOUTH.NET.

On the group's just-completed U.S. tour with AMON AMARTH, AT THE GATES and GRAND MAGUS:

Daniel: "It's been a really good tour. We haven't been supporting that much lately. It's been a few years since we did that, so it's been great to reach out to the AMON AMARTH fans. It's been a great vibe backstage as well — four Swedish bands. It's been cool."

On the songwriting process for the group's latest album, "Will To Power":

Daniel: "The process is usually Michael Amott writing most of the riffs. It's always been that way. He comes up with the riffs, and the other bandmembers contribute a little bit, you know. It's like building a big jigsaw puzzle, kind of. Eventually, and hopefully, all the pieces fit and we have a new album. On the last album, we worked pretty much me and him together. It's just a really natural process for us. We've been doing this over 20 years now, so we have a pretty smooth communication that works out well. Then you have Alissa [White-Gluz, vocalist] coming in and writing some of the lyrics. In the studio, everybody contributes with their identity."

Daniel: "It's rare, because there's a tendency to fall in love with the demo. You listen to it so much that when it's time to actually record it, you sometimes just go back to saying, 'Let's do it like we did on the demo,' because it was good. Some songs really come together in the studio. They were not properly finished when we got into the studio, and then it' a little bit of a different story, and anything can happen."

On "The World Is Yours":

Daniel: "'The World Is Yours' was the first song that we finished writing [for 'Will To Power']. It was actually finished a good while before the other songs. Once we had the whole album recorded and all the songs in front of us, we just felt like this is the one that really stands out as the most typical ARCH ENEMY song in a way. It had all the stuff we want in a song, like the fast double kicks and the shredding guitars, everything. The energy is there, so it was the obvious choice [for a single]."

Daniel: "The reason it was time for a ballad [was that] a lot of our influences from back in the day — I'm talking about bands like JUDAS PRIEST and SCORPIONS, bands from that type of style — they always had a ballad somewhere in there, so it was not a huge step for us as it might seem. For me, playing drums that slowly, that was a challenge, actually, because I don't think I've ever done that. But Alissa is a great singer as well — she has a nice, clean voice, and she can do that stuff too, so why not? It was a chance for us to put another flavor to the album. It kind of makes the whole album breathe a bit more."

On what guitarist Jeff Loomis brings to the band:

Daniel: "First of all, he's an amazing guitar player — a mind-blowing guitar player, really — but he's also a very, very nice guy. His personality fits really well in with the band. When we're onstage or offstage, he contributes to the good vibes in the band, and that's really, really important when we spend so much time on the road like we do. If there's a dark cloud somewhere in the band, it's going to bring everybody down quickly. Apart from that, of course he puts his touch on his guitar playing as well. Him and Michael are both excellent guitar players, but they have very different styles, and that complements each other in a good way."

On whether the group has started writing material for its next album:

Daniel: "We don't write that much on the road, because it's not the right setting for us. Somebody might hum a melody into his iPhone, but we don't do much more than that. We have to consciously take time in the schedule when we plan ahead — 'Okay, these three months, we're going to work on new music. No shows then — we're going to stay off the road.' We have to plan, because nowadays, it feels like a year can disappear really quickly, especially when you're on the road and you're repeating a pattern. [When] you play shows every night, time just flies away, so you have to plan ahead... There will be [a new album] eventually, one day. We have done a little bit of writing, but I think we're still in the early stages of that. First of all, we need to get through this year. We have another tour in Europe with AMON AMARTH and HYPOCRISY, and that's going to take us up to about Christmas. But next year, we plan to get serious about new music and hopefully record a new album."

Daniel: "We have the best fans. I'm really proud of our fans. I think we've been consistent. We haven't deviated from what is ARCH ENEMY a lot. We've stayed in the path pretty much all the time, in my opinion. Also, we got lucky. It's about timing as well. We came out in the '90s, and the '90s was really different from now — totally different. We've taken small steps with each album in popularity. We have never really exploded. We've incrementally grown a little bit, and I think that's very different from, for example, a pop artist. If you have a massive hit and you just explode, suddenly, you're the thing of the day, and two months later, maybe your fans have forgotten about you. What do I know? I'm a metal guy. [Laughs]"

ARCH ENEMY's latest album, "Will To Power", was released in 2017 via Century Media. Co-produced by Erlandsson and Amott, the record was mixed and mastered by longtime collaborator Jens Bogren (OPETH, AT THE GATES, DIMMU BORGIR).