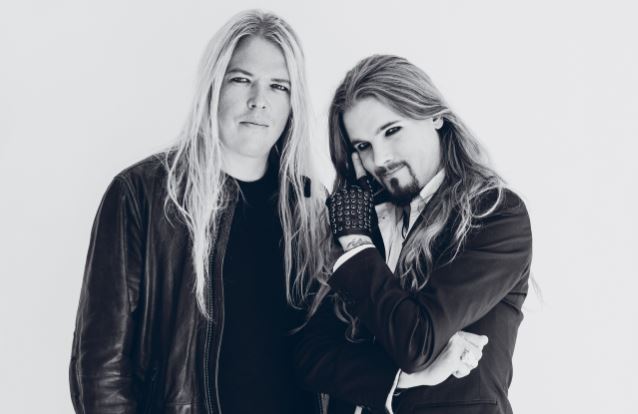 Perttu Kivilaakso and Eicca Toppinen, members of the world-famous heavy metal cello band APOCALYPTICA, have written an opera for the Finnish National Opera, combining heavy rock music with unabashedly Romantic melodies. "Indigo" will be premiered in Helsinki on January 22, 2016.

Year 2016 for the Finnish National Opera will begin with the world premiere of an opera from the cutting edge of Finnish music. "Indigo" is a full-fledged opera that seamlessly blends heavy rock music with unabashedly Romantic melodies.

"We have created the most beautiful opera since 'Turandot'," the two composers say. "No one else would have the guts to write such lovely arias and such a Romantic story in the 2010s." The music was edited and orchestrated by Jaakko Kuusisto, who will also be conducting the performances. The opera is scored for traditional symphony orchestra, with no drum kit or electric guitars added.

The libretto is by Sami Parkkinen, an exciting tale addressing the fundamentals of the human condition. The narrative focuses on the powers of an all-pervasive intercontinental corporation, the perils of technology and the quest for happiness. The corporation has developed an efficiency-boosting drug that has unpredictable side effects. As the number of victims increases, only the original developer of the drug can save the day. Someone must brave the journey into a parallel reality through a strange machine. Will the key to happiness be found there? As is often typical for opera, "Indigo" operates on a number of levels: the parallel reality, the dream world and the subconscious of individuals, where the deepest state is known as the "indigo state."

Perttu Kivilaakso and Eicca Toppinen are confident in their vision and believe in bringing extremes together. They say: "Put simply, this is the opera that we would like to see. It has no target group as such, just as APOCALYPTICA doesn't. If we love it, we can't be the only ones. That's how we do everything we do."

The energetic production will be directed by Vilppu Kiljunen. "Indigo" will be performed in English, and its cast will include prominent Finnish singers. The sets are by Sampo Pyhälä, the costumes by Kalle Kuusela and the choreography by Reija Wäre. The last of its eight performances in Helsinki will be on February 18, 2016. Tickets are available at Lippupiste.