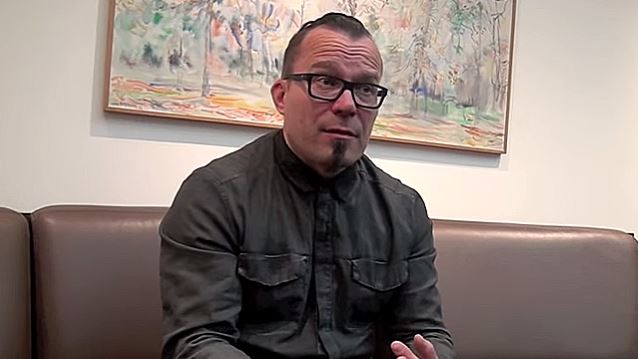 RNL Social Media recently conducted an interview with Paavo Lötjönen of Finnish cello rockers APOCALYPTICA. You can now watch the chat below.

Speaking about APOCALYPTICA's decision to work with producer Nick Raskulinecz (FOO FIGHTERS, DEFTONES, MASTODON) on the band's new album, "Shadowmaker", Paavo said: "Nick is a great producer. He has done a lot of famous albums — with the FOO FIGHTERS, RUSH, MASTODON… many names… JANE'S ADDICTION. He's like a top-class producer. And he was, [for] a long time, on our wish list to work with. And we're really happy that he wanted to work with us. And as a personality, he's a really inspiring guy. He's like a metalhead — black t-shirt, long hair and a cap on. Like a Tennessee guy. And he's a bass player himself. But on the other side, he has a lot of technical skills. He has been working at Sound City [studios] in L.A., on Rick Rubin's team, before. So he has the tools to make a high-class production. He took a really big part [in] our arranging and adjusting the songs in the final end."

He continued: "[Once] we [had] composed most of the songs during the last summer, we went to Nashville for pre-production for ten days. And we were practicing all the songs, and we had gone through all the songs, and we re-arranged the songs. Some of the songs we totally changed with him, and some songs we composed some more, and some songs were okay for him. So he sent us back home to practice some more, and then we were ready for recording the album."

Paavo added: "We did in seven weeks in the Nashville mountains. So it was interesting, where we lived. We were living there in a small hut close to the studio, totally in the middle of the woods. Like some kind of scary-movie kind of hut over there in the middle of nowhere. It's just coyotes and rattlesnakes and deers in the garden. It was a very inspiring place to make an album."