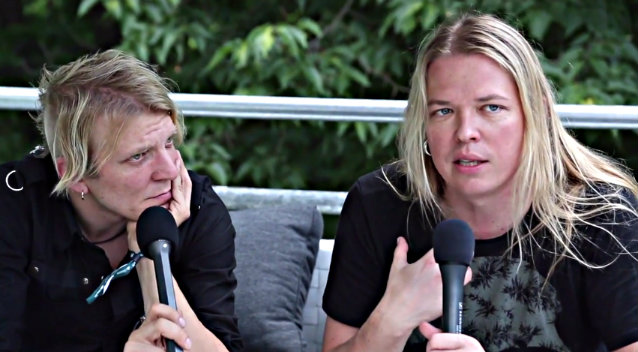 Thorium magazine conducted an interview with Eicca Toppinen and Mikko Sirén of Finnish cello rockers APOCALYPTICA on August 9 at the Heavy Montreal festival in Montreal, Quebec, Canada. You can now watch the chat below.

For APOCALYPTICA, working with Perez on the entire project elevates the musical vision to a new level of coherence between studio production and live performance, as well as renewing the focus on the band's homogeneity after the recent feature projects.

"It's sort of changed the concept to the thing that we figured out how we can develop and we can squeeze more out of ourselves and we wanted to make more of a band album," Sirén told Thorium. "We've done work with orchestras and different types of things, and in the past, we worked with many, many different singers all the time and it's been great and it has developed us as musicians. But now we wanted to make a band album, and we thought how to create it in the best possible way, so we decided that we're gonna have one singer throughout the whole album, and to create it together with him and that's a new challenge for us. And we're really to have… His name is Franky Perez, he's an American guy who's been touring a lot. He's been touring with Slash, he's been touring with SCARS ON BROADWAY… He's been around and he's a super-, super-good singer. He has a quite unique voice, which we fell in love with, and we are excited to go out with him."

Asked if this means that APOCALYPTICA will no longer collaborate with other singers in the future, Sirén said: "No. This is [just for this] album. Who knows, even a half year from now, if somebody asks us to come to play on their album, or if we do just an extra track for something, but we wanted this album to be special and something different where we can develop ourselves again."