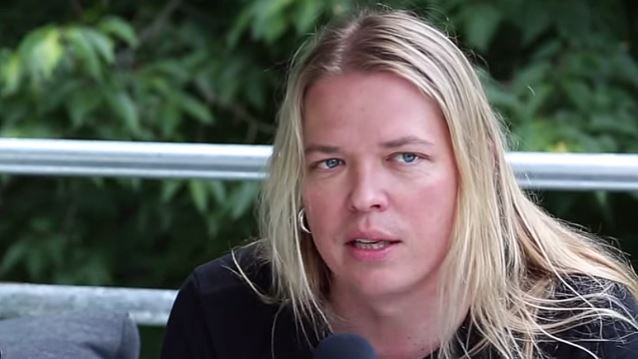 Eicca Toppinen of Finnish cello rockers APOCALYPTICA was recently interviewed on the "Collision" radio show on 99.9 Voice FM in Ballarat, Australia. You can now listen to the chat in the YouTube clip below.

Speaking about APOCALYPTICA's forthcoming album, "Shadowmaker", which features singer Franky Perez handling the vocals on the entire record, Eicca said: "We did the 'Wagner [Reloaded]' thing [in 2013], then last March we did a tour with a small orchestra… So many different things together with too many people… Not too many, but a lot of people. And this time, it was, like, 'Okay, now it's a cool moment to focus on what is APOCALYPTICA. Let's make a band record.' And that was one reason why we wanted to have not a lot of featuring artists on the record. We wanted to have one singer sing the record and to be able to tour with us the full album cycle. So I think it was really exciting to… We let the doors open to all kinds of things, and now we closed the doors and stayed inside [and said], 'Okay. Let's dig in deeper to the core of the band — what we are as a band. And it was very exciting. And I love the result, the [new] record."

Eicca also talked about APOCALYPTICA's musical evolution, explaining: "I think we changed for every album — sometimes more, sometimes less — but there's been change between every record. And it's because we change as people as well. And our musical taste changes. But I think, for example, we did the vocal collaborations on so many previous records, and now having Franky in the rehearsal room with us, rehearsing and arranging the songs before we went into the studio, has made a really big difference on the structure of the songs."

The official video for the "Shadowmaker" title track can be seen below. The CD will be released in April via Eleven Seven Music Group in the United States, Canada, United Kingdom, Japan, Australia, New Zealand, the Middle East and South East Asia.