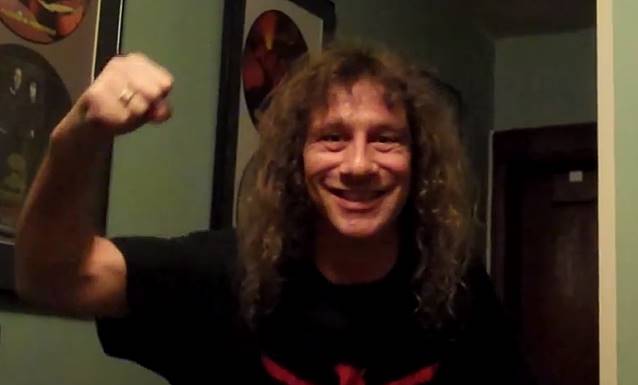 Dave Smiles of Full Throttle Rock recently conducted an interview with guitarist/vocalist Steve "Lips" Kudlow of Canadian metal legends ANVIL. A couple of excerpts from the chat follow below.

Full Throttle Rock: What effect has your recent success, and all the extra attention, had on your life?

Lips: The largest effect is that we no longer work regular jobs. ANVIL has become our main source of income.

Full Throttle Rock: The new album, "Hope In Hell", shines with youthful spirit and enjoyment of life. Where do you draw your inspiration from when writing your songs?

Lips: They come naturally... no premeditation... Simply plug in and play what comes to you. You make things up spontaneously without thinking about what you are technically doing. This is a magical process in a way. In a matter of a few minutes, where there was nothing suddenly there's a new song. It's not something that can be explained, it just is!!

Full Throttle Rock: Could you tell us about recording sessions for the new album? Was it a difficult album to create?

Lips: In actual fact, the new CD, "Hope In Hell" was one of the smoothest recordings we have ever done. I was completely prepared and knew exactly what needed to happen. [Producer] Bob's [Marlette] influences from the last CD were an enormous help to me in writing and arranging the songs properly for the best results. It should never be difficult. If it is, then you probably overwrote your abilities and this tends to create weakness in the overall result. Performances should be natural, fluid and consistent. Anything less is not worth keeping.

Full Throttle Rock: What do you think about the state of the music industry? Has downloading had a positive or negative effect on music?

Lips: It hasn't really impacted the music as much as the business. Music has become the advertisement for fans to come to the shows and buy t-shirts. There is no money in making music anymore as most acquire it free off the Internet or just stream it off the many web sites that share the music.

Lips: I don't know. I don't like most new metal. And in many cases I can't read their names, because the logos are purposely created to be impossible to read. Their vocals, if you can call it that, are impossible to sing along with or understand. I'm into old-school metal and hard rock when musician excellence was a priority.