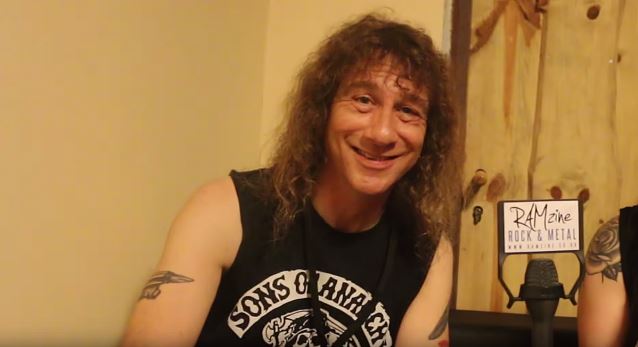 Victoria Purcell of RAMzine conducted an interview with vocalist/guitarist Steve "Lips" Kudlow of Canadian metal legends ANVIL at the 2015 edition of the the MetalDays festival, which was held on July 19-25 in Tolmin, Slovenia. You can now watch the chat below. A couple of excerpts follow.

On how the music industry has changed since ANVIL's inception in the late '70s:

"I really feel that the unwise choices and stupidity of the people who were in charge of the way records were manufactured and CDs and… they left the barn door open, and all of the horses ran out. And that's the way I kind of see it, and I don't know if there will ever be a way back."

On how the music industry's downfall has affected younger musicians:

"I think that it's removed pretty much all hope for any upcoming, new bands. There's no infrastructure, there's no building of a career… It's like…. I don't know… The bottom fell out. The only time your music is worth anything is before you actually record it, and then you can do what we are about to do, which is crowdfunding."

On ANVIL's crowdfunding campaign for the band's upcoming album "Anvil Is Anvil":

"I'm sure that we are gonna do okay with the crowdfunding, but I can't see a new band, who hasn't got a name, how are they gonna get anybody to go, 'I'm gonna pay for your CD before I even know who you guys are.' How is that gonna work?

"Well, there's a number of things that have to be taken into consideration. In today's music scene, anybody can record; there is no filtering system, there is no record company, there are no A&R people, saying. 'This is good. That's better. And that's bad.' There's no one making judgment calls, and putting out money on it. In the early days, you had to be good if you were gonna get a record deal — period! And it was the record companies' job to go out and find the good bands to record. That doesn't exist anymore. And the kids are left with [saying], 'I've got 10 quid. Whose album am I gonna buy?' Well, this is a proven product — people have been listening to this music for years — [so] I'm gonna take that.' It's as simple as that."

ANVIL will enter a studio in Cologne, Germany in October with producer Martin "Mattes" Pfeiffer to begin recording "Anvil Is Anvil" for an early 2016 release.