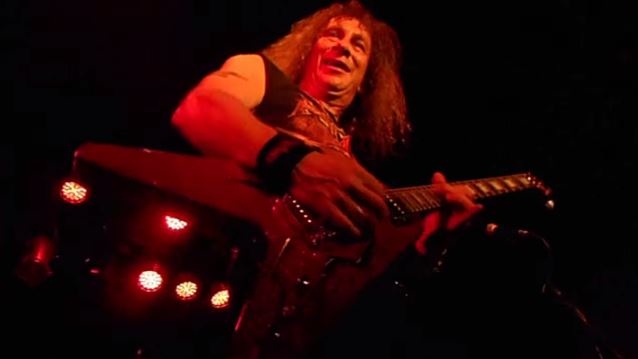 Jack Antonio conducted an interview with guitarist/vocalist Steve "Lips" Kudlow of Canadian metallers ANVIL on March 25 in Edmonton, Alberta, Canada. You can now listen to the chat using the Mixcloud player below.

Speaking about the recent passing of TWISTED SISTER drummer A.J. Pero, Lips said: "Well, A.J.'s, of course, an old acquaintance. We met the TWISTED SISTER guys going back to 1982… Yeah, it's, like, '82. I've known those guys for decades now. [It's] very sad. I think the saddest part is not going for checkups to the doctor, and that's what really… That would have made a world of difference. We wouldn't be talking about it today if he had. That's what the problem was; he didn't go to the doctor. He had long-term heart damage from heart disease and never went and had it looked after, and he died of a massive heart attack. [It's] very, very sad."

He continued: "Going to the doctor is everything. And a lot of men are very, very, very proud. If I'm not sick and if I can get out of bed, it's a good day; who cares? And until they take me away on a gurney, I'm fine. Most men feel that way. But it's probably not the smartest of options — to ignore what your body is telling you. If you've got some problems, go to a doctor."

Lips told Horns Up Rocks! in a recent interview that the band will spend most of 2015 on the road, but will return to the studio at the end of the year to record the follow-up to 2013's "Hope In Hell". He said: "We have a new album pretty much all written, but we're gonna be busy probably 'till next September. So that's when we plan to go in and record again."