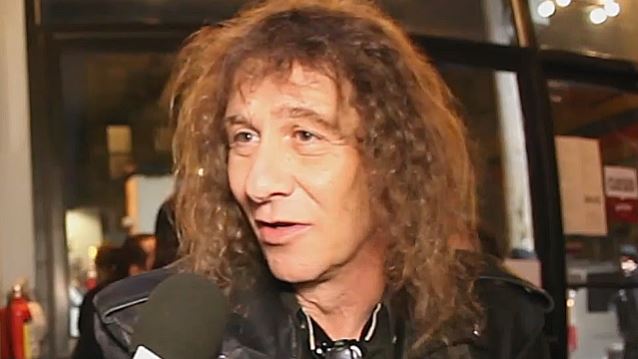 Jo Schüftan of Horns Up Rocks! recently conducted an interview with vocalist/guitarist Steve "Lips" Kudlow of Canadian metal legends ANVIL. You can now watch the chat below.

Asked what he would do differently if his band was starting out today, Lips said: "I don't think there's anything that can be done differently. You know, there is no music industry as such, so it's a completely different… I mean, starting out today, you might as well not bother. There's no industry. How can you start? I don't even know. I wouldn't even know how to begin tackling that problem today. I'm a very fortunate and lucky man that I've created a brand name back in the early '80s. That's why I'm able to exist today and people know who I am. But if I had to start again today all over without anybody knowing? Forget it. How do you do it? How do you do it? Someone tell me. I don't know. I have no idea. [I have] no clue."

He continued: "[There are newer bands that] are hungry enough to keep it going, like the half a dozen bands that are opening for us tonight. Probably none of them are getting paid. I mean, how do you do it? That's what you have to do. You have to get seen, and hopefully somebody likes you enough to buy your t-shirt to help you pay for your recordings. I mean, I don't know. How are you gonna make it? How do you make it? There's no radio play for the music that we do, there's no record companies to put ads in magazines, there's no infrastructure.

Lips also spoke about what inspired him to become a musician in the first place and why he never expected to become rich from playing music.

"You've gotta do it for the right reasons," he said. "[You've gotta be] doing it for life fulfillment, and you [can't] be doing it for money, 'cause the second that you're doing it for money, you're gonna fail, because there isn't any — for the most part. It's like my mother said in the [ANVIL documentary] movie, 'Steven gave up making money.' That's right. I did. I have no expectations of making money, because there isn't any. Who's gonna pay you? For what? I mean, that's the way it works, and especially for a young band coming up, what you're doing it for is to get on stage and be seen and fulfill that desire of being in a band. That's why you're doing it. If you're doing it to make money, you're doing it for the wrong reason. Everything that I've done, I've made money from any other which way that I could than from my band. And even today, I'm not making money from ANVIL's music, I'm making money from the t-shirts. I'm in the same business as my dad. He was a tailor and sold garments. I sell t-shirts — garments. So, realistically, the only difference between my dad's business and mine, I use my music to advertise my t-shirts. That's the reality of it all."

According to Lips, ANVIL will spend most of 2015 on the road, but will return to the studio at the end of the year to record the follow-up to 2013's "Hope In Hell". He said: "We have a new album pretty much all written, but we're gonna be busy probably 'till next September. So that's when we plan to go in and record again."