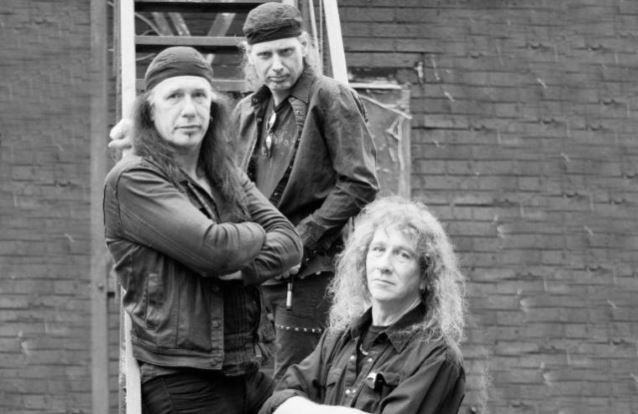 Canadian metal legends ANVIL will release their new album, "Anvil Is Anvil", on February 26, 2016 worldwide (excluding Japan) via SPV/Steamhammer. The album will be available on digipak CD, LP, and as a digital download.

"Anvil Is Anvil" was recorded in October in Cologne, Germany with producer Martin "Mattes" Pfeiffer. ANVIL guitarist/vocalist Steve "Lips" Kudlow told Metal Talk about the recording sessions for the new CD: "[Martin has] been working with, and still is working with, Udo Dirkschneider. He did the last couple of U.D.O. albums. We listened to them, and they sound great. He seems like a really great guy, [so] we're gonna try that. Not that we didn't like what Bob Marlette [producer of 2011's 'Juggernaut Of Justice' and 2013's 'Hope In Hell'] did. Bob Marlette is a genius — absolutely incredible — [and we] loved his work, but I think it's important for a band to change its 'underwear.' It doesn't change the person, but it changes the underwear, and it is important to change your underwear; otherwise it starts to stink. It's the same sort of concept: you can't stay the same; you need to inject something new, something fresh, something that you didn't do yet."

Asked how the success of "Anvil! The Story of Anvil", a 2009 documentary produced by a former roadie that gave the band more notoriety and fame that it was unable to generate on its own, changed ANVIL's career, Lips told Metal Talk: "The main change is that, basically, we haven't stopped working, and we were able to give up our day jobs, and this has become it. Which is all that you can ever ask for. I mean, that's a dream — to be able to do what you love and actually make a living at it. What more could you possibly ask? What, to be a millionaire? Well, you know, I think that's asking too much; that's getting greedy, and I've never been that way. It's not really been about money as much as it's been about survival, and I think most people feel the same way about their lives. And I'm no different. It's not really about being greedy and having millions of dollars; it's just getting what you want out of life and enjoying it. That's what it's really all about."