Canadian metal legends ANVIL will headline the Perth Metal Meltdown on Friday, July 18 at the Royal Canadian Legion in Perth, Ontario, Canada. Also scheduled to appear are JOE THRASHER, AGGRESSOR, DRILLPOINT, RITUAL, ENDEMISE and EPOCHOLYPSE. Tickets are $10 in advance and $12 at the door.

"Anvil! The Story of Anvil" screened as the Centerpiece of the Los Angeles Film Festival on June 26, 2008 at the Ford Amphitheater in a program that included live musical performances and "special guests," including ANTHRAX guitarist Scott Ian. Check out photos from the event from Wire Image.

"Anvil! The Story of Anvil" is a mockumentary-like true account of fiftysomething Canadian heavy-metal practitioners Steve "Lips" Kudlow and Robb Reiner who, after a desultory European tour with their band ANVIL, decide to record a 13th album in a final attempt to fulfill their boyhead dreams of stardom.

Director Sacha Gervasi is an old friend of the band's that used to do some roadie work for them back in the 1980s. He has filmed some of their shows from their November 2005 and June 2006 European tours. He also filmed Lips' 50th birthday show at Heads or Tails in Etobicoke, Ontario, Canada on February 25, 2006. As well, he filmed some of the recording of "This Is Thirteen". Sacha also interviewed many people from ANVIL's past and present, including former bandmembers. 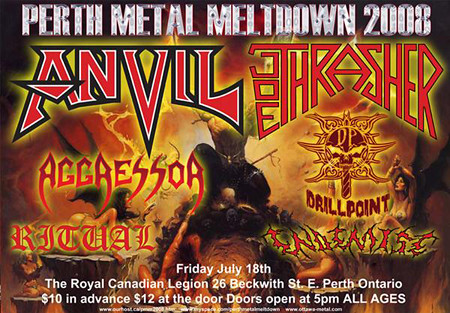