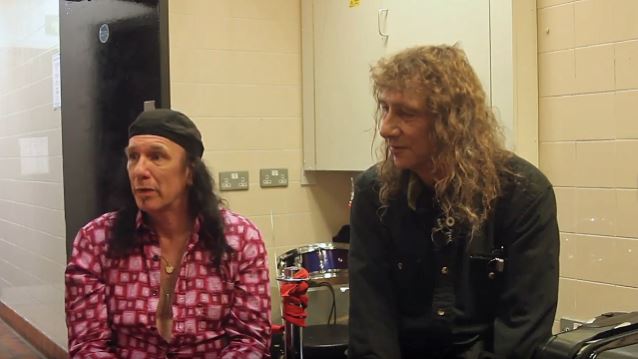 Drummer Robb Reiner and guitarist/vocalist Steve "Lips" Kudlow of Canadian metal legends ANVIL have confirmed that they are "about halfway through" filming their next documentary project.

During an October 20 interview with MetalTalk, the pair revealed that they just saw the first trailer for the new movie, but could not go into the specifics of what the film is all about.

Said Lips: "We're not talking about it, because there's no point, because it's a long way off. The filming is about halfway through, and it's not done yet. So what are we talking about? It's gotta get done first."

Added Robb: "We're really busting at the seams to tell people about a lot of it, but it's just not the right time to get into it, that's all. But when it comes out, it's gonna, I think, surprise the shit out of everybody."

Reiner and Kudlow also revealed that they have written "six new songs" for ANVIL's follow-up to "Anvil Is Anvil" album, which came out on February 26 worldwide (excluding Japan) via SPV/Steamhammer. "We're gonna try to record it next summer," said Robb. "And we're just actually tossing around album titles right now."

ANVIL's first documentary, "Anvil! The Story of Anvil", was named one of 2009's best documentaries by a slew of film critics associations across the continent, including critics in Chicago, San Francisco, Toronto, and Las Vegas, as well as the International Documentary Association, the Online Film Critics Society, and the National Society of Film Critics. It also made the year-end Top 10 lists in publications such as the New York Times, Washington Post, Newsweek, and Village Voice.

"Anvil! The Story of Anvil" was the directorial debut of screenwriter Sacha Gervasi ("The Terminal") and was produced by Rebecca Yeldham ("The Kite Runner" and "The Motorcycle Diaries"). The film follows Kudlow and Reiner and their band, ANVIL, which released one of the heaviest albums in metal history, 1982's "Metal on Metal". The album influenced an entire musical generation of rock bands, including METALLICA, SLAYER, and ANTHRAX, who all went on to sell millions of records. ANVIL, on the other hand, took a different path — straight to obscurity. The film is both entertaining and touching as it follows their last-ditch quest for the fame and fortune that has been so elusive to them.

Asked if there was been a drop in the level of interest in ANVIL since "Anvil! The Story Of Anvil" first came out in 2008, Lips told The Metal Voice: "The interest has not changed; I really don't think so. And in fact, actually, more people have seen the movie since. Plus the fact, it's moved, particularly in some countries, on to regular TV programming. I would say even more so now than ever, and I don't think that that's gonna dissipate anytime soon. Certainly, there are millions of people that have never seen the band that have seen the movie. So therefore we have an endless amount of work out there, theoretically. We're gonna be playing for the next fuckin'… until I die. And what does that mean? That means that I can make a living from being in ANVIL for the rest of my life."

Lips also refuted the suggestion that "Anvil! The Story Of Anvil" singlehandedly gave ANVIL a career. He said: "If the band was a lousy band and they just made a movie, it would have dissipated in a few weeks. And you can watch the dozens and dozens of… And even some of the big bands have tried to do documentaries and it's made no difference for their careers. And in fact, it's been detrimental."

He continued: "There's a number of reasons [that 'Anvil! The Story Of Anvil' connected with so many people] … First of all, you need to have been relevant enough. ANVIL were an inspiration to ANTHRAX, MEGADETH and METALLICA. We were one of their favorite bands. We still are one of their favorite bands. You can't hire Lars [Ulrich, METALLICA drummer] to sit in on your documentary and get him to say those things. He did that for free. In fact, all the members of all those bands did that for free. These are unique situations. Nobody can recreate that and think that they're gonna get the same results. Never mind the fact of how the documentary came to be to begin with."

Lips added: "If you take into consideration this was a fan [director Sacha Gervasi] that we let into our change room in 1982, grew up to be Steven Spielberg's screenwriter, came looking for his old friends that let him into that change room in '82, meets up with us and goes, 'I'm gonna make a movie about you.' That in itself is a story within itself that you can't recreate. You get what you put in in life. If we had closed the door on that 15-year-old kid in 1982, there would have been no ANVIL movie. I wouldn't have the success I do today. This has been sustained by good recordings and the band being a good band beyond just a movie."