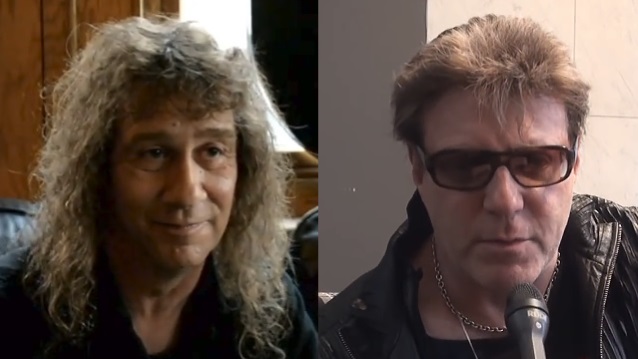 On when ANVIL would possibly retire:

Lips: "When they take me away on a gurney. You don't retire. You don't retire from this business. You die. It's true. Those who attempt to retire end up going back. How many times did the THE WHO say it's their final tour? [Laughs] Every time they come to realize, 'What did we do?' And they get back on the road. THE ROLLING STONES… they're still going, man. And they're great. They're great. Why would you lose it? You know what? Especially vocals, okay, if you sing properly and have sung properly and you quit smoking, there's no reason you can't sing until they put you in your grave. If you can talk, you can sing, right? You don't get arthritis. If you keep using it, you won't lose it. It's all about that. So, if there's no reason you can't do this until you're very, very old and worth discovering, begrudgingly so, that guys are going into their 70s and 80s, rocking and rolling and there's nothing wrong with that. Just the same way as the audience is growing old with them, begrudgingly and in denial and all of it. The first person to say, 'Those old guys' is old themselves. 'How old are you?' 'I've been listening to them since I was a kid.' 'Well, you're not a kid anymore, are you?'"

On whether taking time off can help a band in the long run:

On the recent comments from TWISTED SISTER guitarist Jay Jay French, who criticized veteran metal bands like JUDAS PRIEST and SAXON as well as THE ROLLING STONES for continuing to perform well past their prime:

Lips: "There's a very, very foolish man who's looking for attention. Plain and simple. That's what that is, to me. He's not in a position to say anything. He's not in a position to say anything, especially when the singer of his band has continued on without him. What is that saying? He's real bitter, he's real unhappy, he's projecting that out there at other people. I feel sorry for him. I love the guy and I feel sorry for him, honestly. I know Jay personally — great guy, really funny, comical, good, really nice character. I mean, one of the last times we were at a festival in France and I'm sitting there with the guys in RAVEN and we're all sitting around this round table and Jay walks up and sits down and we just start joking around and he goes, 'People ask me if we do drugs. Of course we do drugs: Blood pressure pills, diabetes, insulin. Yeah, we do lots of drugs.' I was cracking up; it was funny. At the same time, you're out doing gigs, you're trying to carry on. You do. But, I mean, I'm not going to rip him a new asshole. He did that to himself. He did it to himself. I don't know what his motivation was, I really don't. I think most of it is reflection. He's not feeling good about where he is in his life. Bottom line. I'm maybe a year or two younger than him. I don't see an end to it. You heard what I just said, I'm going to go until I die. There's no such thing as retirement and if you do it properly and you keep yourself in shape, there's no reason you can't do it until you die. You certainly don't carve those who have done it and are doing it even longer and harder and a better job than you ever did. Come on, man. You're going to carve on Keith Richards, really? Come on. Did you write 'Satisfaction'? Did you write 'Paint It Black'? Those are just the early stuff. Come on! You can't do that. It's just not right. [Laughs] You can't do it."

ANVIL's spring U.S. tour kicked off May 2 in Buffalo, New York and runs through June 16 in Canton, Ohio.

The band's latest album, "Pounding The Pavement", was released on January 19 via SPV/Steamhammer. The disc was recorded at the Soundlodge studios in Rhauderfehn, in the northwest of Germany, with producer Jörg Uken.