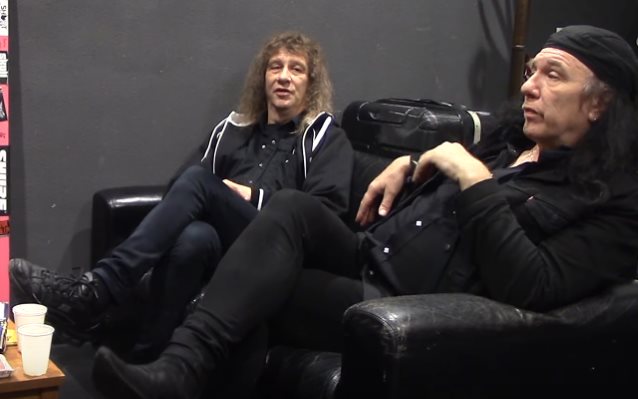 Promoportal-Germany recently conducted an interview with drummer Robb Reiner and guitarist/vocalist Steve "Lips" Kudlow of Canadian metal legends ANVIL. You can now watch the chat below.

Speaking about the addition of bassist Chris Robertson to ANVIL's ranks, Lips said: "He fits. That's the thing. Finding the right guy, it's really not that easy. We went through a few. Realistically, since the very beginning, after the two original guys left, we never really replaced [them] with the right guys. You don't really realize it until you do get the right guy, and then you go, 'Wow! Now I see what it should have been.' And most of it, really, is about singing. You need a second voice to do backups live. It's as important as another guitar; in fact, probably more important than a second guitar is that whoever you're gonna get in the band is particularly… because it's more proper to have a bass player than just another guitar player. We needed a bass player that was good enough that you don't notice that there's a second guitar missing, and he has to be able to sing as well as what we once had in the sense like Dave Allison, where the second voice suits the first voice. They make a full thing; not one guy is just a shadow of the other, and it's not really adding anything. That doesn't do anything for a band. You need a second voice that works with the first voice, and I think we found that in Chris. He's a great three-piece bass player, which is what we ultimately needed. It's a very, very distinct, hard crunching tone that fills the mix and adds as a third entity in the mix, not just a shadow or underneath bottom end. It needed to be a rhythmical instrument and put point and edge and notes to the drum beats. We finally got the right guy, on both levels — both as a singer and as a bass player. We couldn't have asked for a better third guy to make a real three-piece band. And it's a growing process. It's not something that you do overnight. And it's not something that you can just replace just like that."

ANVIL will return to the road in the U.S. in early 2017. The tour will kick off March 2 in Boston, Massachusetts and will run through April 9 in Cleveland, Ohio. Support on the trek will come from NIGHT DEMON and GRAVESHADOW.

Reiner and Kudlow recently confirmed that they are "about halfway through" filming their next documentary project. They also revealed that they have written "six new songs" for ANVIL's follow-up to "Anvil Is Anvil" album, which came out in February worldwide (excluding Japan) via SPV/Steamhammer. "We're gonna try to record it next summer," said Robb.

ANVIL's first documentary, "Anvil! The Story of Anvil", was named one of 2009's best documentaries by a slew of film critics associations across the continent. The directorial debut of screenwriter Sacha Gervasi ("The Terminal"), it followed ANVIL on a thirty-year quest for rock-stardom and it featured interviews with longtime fans and many of the band's successful peers, all of whom seemed equally puzzled by ANVIL's lack of fame and fortune.