Drummer Robb Reiner of Canadian metal legends ANVIL will hold the first major gallery show of his paintings from September 25 to October 6 at the BBAM Gallery in Montreal, Quebec, Canada.

What the art lover will find most unique about Reiner is his lifestyle outside of his painting.

Reiner's life is, in most cases, a very loud and busy existence as he is an iconic drummer in the legendary Canadian metal band ANVIL that he co-founded with his bandmate Steve "Lips" Kudlow in the 1970s. His love affair with the canvas brings peace and quiet to an otherwise chaotic existence. One day he is behind his drum kit playing for screaming metal fans, and the very next day, Reiner is sitting in his art studio, alone, a brush in hand, creating an image of stillness. Walking in his shoes, taking the path of two extremes, Reiner's perspective in life brings a fresh and unexplored world that only he lives in. The artist does not want to apply any established rules — he only wants to be faithful to his impression.

The way Reiner works to create a painting is also very unique. Reiner travels around the world (on tour with his band) and takes photographs of interesting subjects that are compiled town to town in between all shows. When in between tours, while life in Reiner's world is isolated and quiet, the archives of research material (photographs) are revisited. Reiner finds what he can work with and bases the painting that he will be creating on compositional potential that is established when the photo is shot — sketches are made on paper, and the sketch will determine to the artist if the painting will work or not — then the creation process commences. The photographs are never copied; they are only used for compositional inspiration, and are "custom made" to Reiner's vision. All paintings are simplified from the actual photo (i.e. removing people — never adding anything). Painting in the colors are all dependent on the mood of the artist at the time of the creation.

Robb Reiner paints three canvases a year between his rock 'n' roll life. Each painting takes months from beginning to completion. The first step is a creation of the under-painting, and then the colors are drawn in.

Reiner enjoys painting while listening to his music playlist that is an assortment of the greatest psychedelic rock, heavy rock, music from the '60s-'70s.

Scenes of emptiness filled with stark somberness are presented with robustness and energy gaining nuances in the delicacy and grace in which Reiner suggests infinite and infanite knowledge of the imagination and knowledge of the contained intellect.

Reiner approaches each painting as a composition of light and adherence to a quirky realism mixing forms of surrealism, symbolism and abstraction.

Reiner's passion and love for art brings him peace and has been his secret world for many years until he reluctantly agreed to show the world this side of his life. A few paintings were featured in the critically acclaimed, award-winning documentary "Anvil! The Story Of Anvil" — a movie about his band — which has been called "possibly the greatest film yet made about rock and roll."

Reiner has turned down many gallery offerings as all galleries inquiring about his art have come with the stipulation to sell his original works. Reiner has also received private offerings to purchase his original works. Subsequently, following all the demands of ownership, Robb Reiner has issued 2013 and 2014 Art Calendars for the first time ever that have been very successful — in a very short amount of time, both versions have sold out.

Robb stated in a 2011 interview: "I paint for me! My home is my gallery and very few are blessed with access to the gallery. I, in general, have not had the desire to share them until the director of the ANVIL movie talked me into showing the world that I paint. This, in turn, has exposed a few works and opened up a floodgate of public interest and endless offers to buy my works." 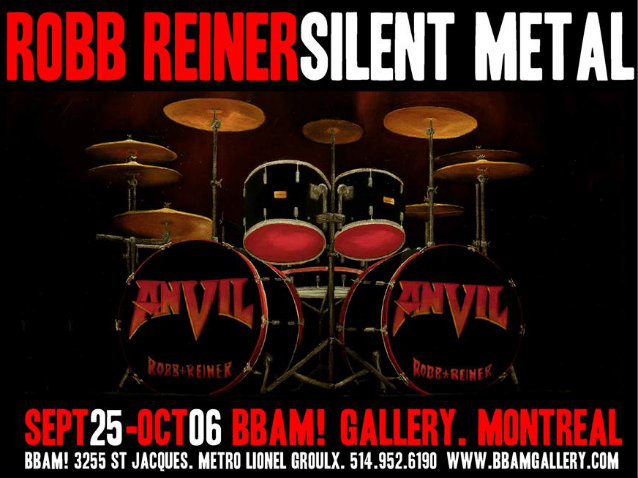