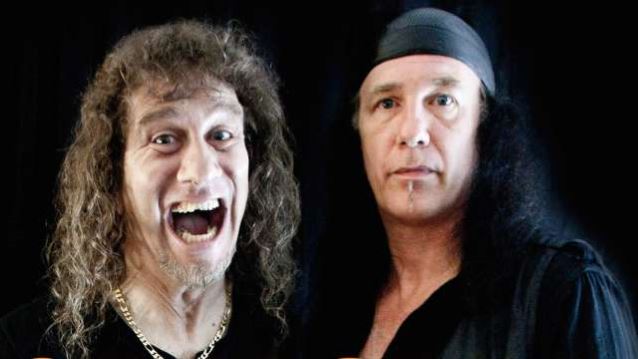 Canadian metal legends ANVIL have completed the songwriting process for their new album, tentatively due next year. The band's drummer, Robb Reiner, told Canadian journalist Mitch Lafon earlier in the month: "We're still touring [2013's] 'Hope In Hell', which is, you know… I guess it's latest record. It's not that new anymore. But it did very well, in general, for us." He added: "Our new album is in the can. We're probably gonna record it next year. It's written; it's all finished. We just have to pull the pin on when we wanna record it. That's about it."

Regarding how the songwriting in ANVIL works, Reiner told "Slayer Tania" in a separate interview: "In ANVIL, Lips [guitarist/vocalist Steve Kudlow] writes generally most of the lyrics. I contribute a little bit here and there. When he asks me, sometimes I can contribute something. But primarily, Lips comes up with the lyrics and the primary riffs and stuff. We arrange all the music together. And that's basically how ANVIL works. It's a two-man thing. Lips and myself are the face of ANVIL."

ANVIL recently parted ways with bassist Sal Italiano and replaced him with Chris Robertson. Lips told M.E.A.T.'s Drew Masters that Chris has actually been part of the ANVIL camp for some time now, having been both their rehearsal bassist as well as a member of their road crew. Lips also stated that he's glad the band is, once again, "all Canadian — that is the heart and soul of ANVIL."

ANVIL's fourth bassist, Sal Italiano, joined the band as the replacement for Glenn Gyorffy (a.k.a. Glenn Five or G5) in January 2013.

Italiano was a member of the Long Island, New York IRON MAIDEN tribute band LIVE AFTER DEATH and original progressive metal act THE NIGHTMARE STAGE, as well as a former member of the acclaimed '80s heavy metal group CITIES.

Glenn joined ANVIL in 1996 and has appeared on seven of the band's albums, including "This Is Thirteen" and the group's 2011 release, "Juggernaut Of Justice", on which he wrote and sang the song "This Ride".

Released on May 27, 2013 in Europe and May 24, 2013 in Germany on SPV/Steamhammer, "Hope In Hell" was written and recorded following an 18-month world tour which took ANVIL around the globe.